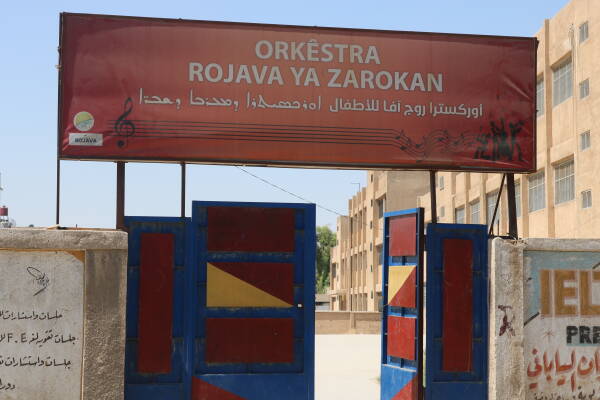 The Rojava Children’s Orchestra Institute has given music education to children in order to pass traditional Kurdish music to the next generation.

The Cizre Region Culture Committee and the Autonomous Administration of North and East Syria established the Rojava Children’s Orchestra Institute in order to pass the Kurdish culture and art to the next generation. Since its establishment, the institute has worked to improve children’s artistic talents. Kurdish opera singer Mizgîn Tahir is one of the music teachers at the institute. She said that the orchestra group has existed for a long time, but they have canceled some of their activities due to the ongoing attacks.

Mizgîn Tahir has been a volunteer music teacher of the institute for three years after returning to Rojava. “The institute was established by the Cizre Region Culture Committee and the Autonomous Administration. Their aim in this project is to keep children out of the negative effects of the war and conflicts and to improve the talents of children in music. Since children are our future, providing such opportunities for them is very important especially in such a process. Children are like seeds, they need protection to grow up. We should focus on the new generation to develop our culture and art. The Rojava Children’s Orchestra Institute was established to pass Kurdish music and culture to the next generation,” Mizgîn Tahir told us.

“We want to develop Kurdish music”

Speaking about the courses given to children by the institute, Mizgîn Tahir said, “The Rojava Children’s Orchestra Institute has many musical instruments from the Middle East and other regions such as violin, cello, tanbur and guitar. What is important for us is to develop the music culture. We benefit from music works all around the world. We also want the academic development of Kurdish music in the Middle East and Kurdistan.  Children aged 8-17 are accepted by the institute. Our education has three levels. We continue to focus on the development of children after they complete these levels. In time, we will form the Kurdish Orchestra group. The institute offers many courses for children such as courses to teach how to play music instruments, how to sing and English courses.”

“They develop despite the war”

Noting that music and art has been developing in Rojava despite the war and conflicts, Mizgîn Tahir said, “Music is the reality of life. Before the revolution (the Revolution in Rojava), there were no musical activities in Rojava Kurdistan. But now, there are many projects about music. Such projects will serve the development of culture and art in Kurdistan. The process that we are going through right now is not an easy process. We live under war conditions. But we can say that there are developments despite the war. Such developments are important achievements in such a process. We need academies and peace to have more visible developments.”

Children took to the stage

Underlining that the Rojava Children’s Orchestra will improve itself more in the upcoming periods, Mizgîn Tahir said, “Maybe we do not have sufficient technical means; however, we do our best by means we have. We want to show the talents of the children and Rojava Children’s Orchestra on the stage. The orchestra has taken to the stage three times until now. Their last performance was at the Mihemed Şêxo Culture and Art Center. Families and people watched the performance of the children. Now, children believe in themselves more. Families told us that they were very happy to see their children’s performance.”

Ronak Hecî works as an English teacher at the Rojava Children’s Orchestra Institute. Indicating that children learn both music and language, she said, “I teach English to children. Children learn English step by step. My experiences with children led me to work for the institute. Children should learn languages to find out what they look for. Learning a foreign language reveals the creativity of children.”