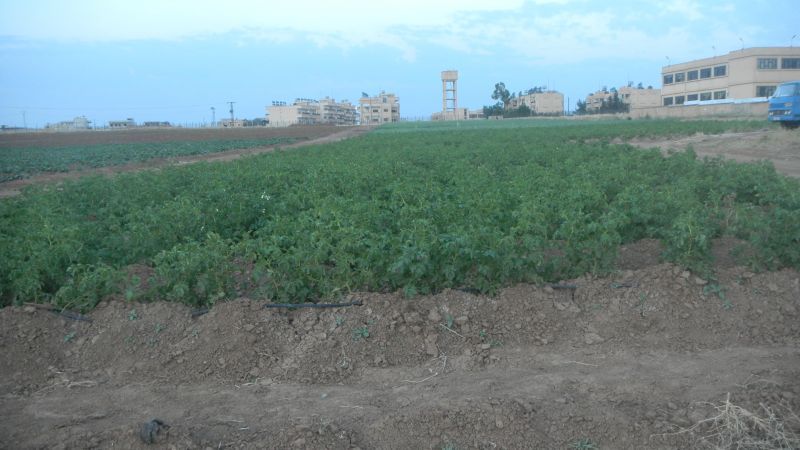 In Western Kurdistan, agriculture and livestock are being revived. While the area of cultivated land gets bigger, livestock is developing and dairy facilities are being built up. Products banned under the Ba’ath regime have already been seen in the market. Economic power is strengthening day by day despite the embargo and oppressions on Rojava, where cooperative organizations have become prominent.

Western Kurdistan is a fertile agricultural zone due to suitable weather conditions. The cantons of Cizîrê, Kobanê and Afrîn, declared in January, have always been centres of attraction thanks to their rich subterranean and terrestrial resources. These lands, which are rich particularly with olives, wheat, corn, barley, chickpeas, spices and charcoal have fed Syria for long years. The land in Rojava is quite fertile for cereal, vegetables, fruits, and some other products, yet the Ba’ath regime only gave permission to grow certain products during its rule of almost half a century.

The region also has rich resources of water, oil and gas. The great Euphrates and Tigris rivers run through this smallest part of Kurdistan. The revolution that started in July 2012 with people taking power in Rojava still continues with spectacular developments in many areas. Many institutions have been formed to organize people to protect and develop the gains of the revolution. One of these institutions is the Agriculture and Livestock Institution that was formed on 15 July 2013 under the Institution of Development of the Economy.

The Agriculture and Livestock Institution has initiated many projects. Especially in the Cizîrê region, significant projects have been started to revive agriculture and livestock farming. Since the products that have been produced from the lands stand on the market at low prices, this progress has become a source of hope for the people of Rojava, which is under embargo.

Newzat Silêman, a board member of the Agriculture and Livestock Institution, told ANF about the developments, projects and why such an institution was needed.

THIS REGION IS SUITABLE FOR GROWING VEGETABLES

Silêman indicated that the Cizîrê Region is ideal for growing vegetables, but the Ba’ath regime never permitted anything to be grown except for wheat, clover, chickpeas and lentils and the aim in that was to leave the people of Rojava dependent on others.

“The lands of Cizîrê are fertile, not only for lentils, wheat and chickpeas, but also for different kinds of vegetables. Cotton, sesame, and sunflower seeds can be sown. However, the government only gave permission for wheat, clover and cotton but did not encourage people to grow any. The government issued reports on purpose that said, “the land is not suitable to grow any vegetables”. All of the vegetables here come from regions such as Lazkiye and the Mediterranean coast. If we could grow vegetables here, we wouldn’t be dependent on other regions. To create a dependent Rojava, different tactics have been tried,” says Silêman.

He also highlights the fact that 300 acres of land have already been cultivated and vegetables are mainly being grown in Dêrik, Girkê Lege, Serêkaniye, and Dirbesiye. “We have approximately 18,000 acres of land and our institution has already worked on most of the land. Some of the land has also been given to the people of Rojava to encourage agriculture” says Silêman.

Silêman also mentions that one of the projects that has been developed is greenhouse cultivation (bio plastic agriculture) and this has first been practised in Girkê Lege. “It was the first green house experience and seeds of tomato and cucumber have been sown on approx. 15 acres,” he says.

Silêman, drawing attention to other projects which are among the gains of the revolution, says 400 liters of milk is produced from 250 cows on a daily basis. “We do not give the milk to traders, we deliver it directly to the people of Rojava by means of communes that have been formed. The reason is, if we give the milk to the traders, it will be expensive, while milk is sold for 75 kurus [cents] on the market, the milk we produce is sold for 40 kurus,” he adds.

Farms also mean job opportunities for immigrant families. For instance, 20 workers in total work in these farms to finance their families.

Before the revolution, the Syrian regime prevented the Kurdish region from accessing flour, however, the institution has also found a solution to the problem by constructing mills. For instance, they have founded a flourmill in Dirbesiyê and, “We produce 40 tons of flour daily in this mill, and it has worked for 20 days so far” Silêman says. He says that works continues in other regions, too, and they aim to reach 200 tons of daily production in the canton of Cizîrê.

He further mentions how they plan to construct dairy factories. Indicating that their organizational model is cooperative, Silêman says, “We are working to give all the land to cooperatives to cultivate when the cooperatives are all formed, and to have more cooperative members to enable people to benefit from the land”.

Silêman notes that in the canton of Cizîrê, there are 157 people who work full time on monthly salary and there are also 1,000 part-time, daily, and weekly workers.

Underlining the fact that the economy of Rojava is prospering despite the embargo on the region, Silêman says, “All in all, the institute workers have a great effect on the economy of Rojava. We did not let the bread prices go up. Prices for wheat have fallen. If the traders had the power, the price for bread would be much higher now. Selling milk at half price was also a significant factor. All of this gave people hope. People have seen that they are not dependent on others”.

“The economy in Rojava is better than the economy in many countries right now. We do not plan to produce just enough for the people of Rojava, but to export products in the future. We want to enable a strong Rojava economically both in itself and towards others,” concludes  Silêman.