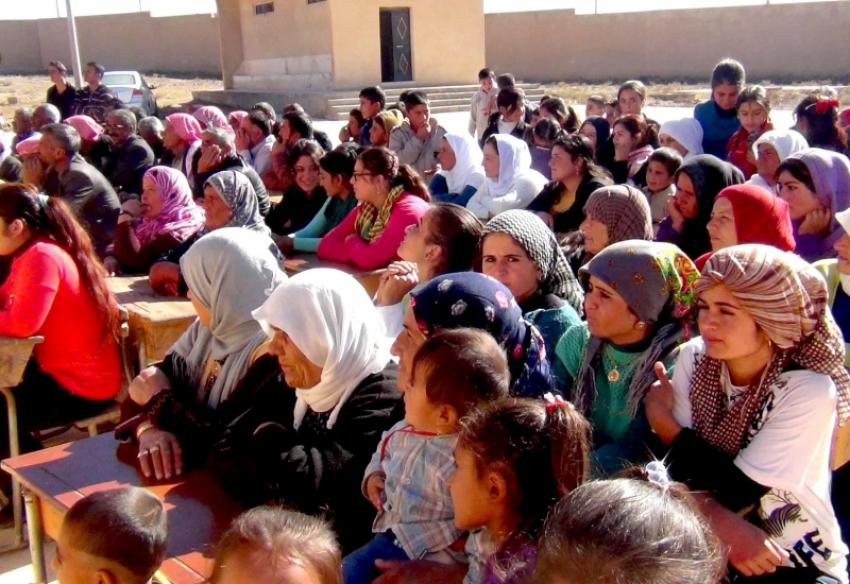 Rojava, which is Kurdish for the “west”, is to be found in Northern Syria. In the middle of a conflict zone, marked by the war against the Assad regime, a Turkish invasion and ongoing conflict with the brutal jihadists of ISIS and al-Nusra, the Kurds and their allies are creating a new kind of democratic system.

Revolution in Rojava is a comprehensive and readable guide to the complex situation. This hugely exciting and important book has wider lessons for feminists, ecosocialists and others who want to create an anti-capitalist alternative.

It is the kind of book that makes you want to buy a dozen copies to give away to friends. Janet Biehl, former partner of late US anarchist ecologist Murray Bookchin whose thought has helped inspire the revolution’s ideology, has translated the book with great care.

It is a partisan account, but not uncritical. There is an emphasis on both the revolution’s strengths and potential weaknesses.

Much of the book is based on personal observation from the grassroots. Due to blockades by Turkey and the continuing conflict it is difficult to get into Rojava. The foreword by the anthropologist David Graeber, who has also visited Rojava, is also interesting.

Given that the conflict in Syria has divided the left, some may challenge the account given here. However, it provides a clear introduction to the complexities on the ground.

It provides a useful recent history of Syrian politics, noting how the repressive Assad regime’s turn to neoliberalism led to revolt as part of the wave of Arab Spring uprisings. The authors note, though, that Islamists came to dominate the uprising militarily due to the intervention of Gulf states and Saudi Arabia.

The struggle by the left-wing Kurds, and their allies from a variety of ethnicities, can be seen as the most promising part of the complex picture in Syria.

The political origins of the Rojava revolution are described in step-by-step detail. It looks at how the Democratic Union Party (PYD) and others inspired by the writings of the Kurdistan Workers’ Party (PKK) leader Abdullah Öcalan, jailed in Turkey, and those of Bookchin, made the revolution.

Various aspects of the project including ecological protection, defence, healthcare, economics, feminism and democracy are all discussed here.

Rojavan fighters are organised in a militia, the YPG, with an all female version the YPJ.

The Rojavan system is explicitly anti-statist and post-nationalist. The Kurds are a nationality without a state, whose homeland is divided between four modern nation-states. But the Rojava revolution’s aim is not to create a Kurdish state, because states and nationalism are seen as destructive.

Instead, it aims to set up a system of deep and direct democracy. This is based on Bookchin’s notion of democratic confederalism and embraces diversity.

Economic activity is based on communes that plan on a local basis and cooperatives. Buildings and other property owned by the Assad regime have been socialised.

The revolution is explicitly feminist. All levels of social activity, from the military to economics and local governance, provide for female leadership. In a conservative and patriarchal society, challenging practices oppressive to women, including polygamy, has been a major focus.

Women often lead armed forces, which also feature the election of officers. The all-female YPJ has provided powerful resistance to ISIS.  The war against ISIS is described, with an account of the defeat of the siege of Kobane in early 2015. The book also covers the liberation of Manbij last year.

Rojava now comprises the three cantons, essentially provinces or counties, of Afrin (in the west), Kobane and Jazira, plus part of Aleppo. It covers thousands of square kilometres and millions of people.

It is under constant pressure. Turkey invaded Northern Syria last year, under the pretext of opposing ISIS but also describes the revolution’s armed militias as terrorists. From day one of the Rojava revolution, the increasingly authoritarian Turkish government has tried to destroy it. Both ISIS and the Assad regime also remain serious threats.

The book is open about the challenges the system faces, particularly from hostile neighbours and a neoliberal world order. The difficulties of providing working direct democracy and a truly ecological and communal economy are also discussed.

The role of the US, and to a lesser extent Russia, is another challenge. Many on the left are critical of a revolutionary alternative that has had to work with major militarist powers such as the US to survive.

Despite the challenges Rojava faces, it does provide an inspiring alternative. The book is an essential and extremely inspiring look at an alternative conception of revolution that might just work.

In the year we celebrate 100 years since the Russian Revolution, new conditions mean that we need to adapt. This book provides much food for thought in rethinking revolution, the state and a politics that puts deep democracy, ecology and feminism at the centre.

[Derek Wall is international coordinator of the Green Party of England and Wales and a long-standing Marxist in the party. His latest book is Economics After Capitalism.]