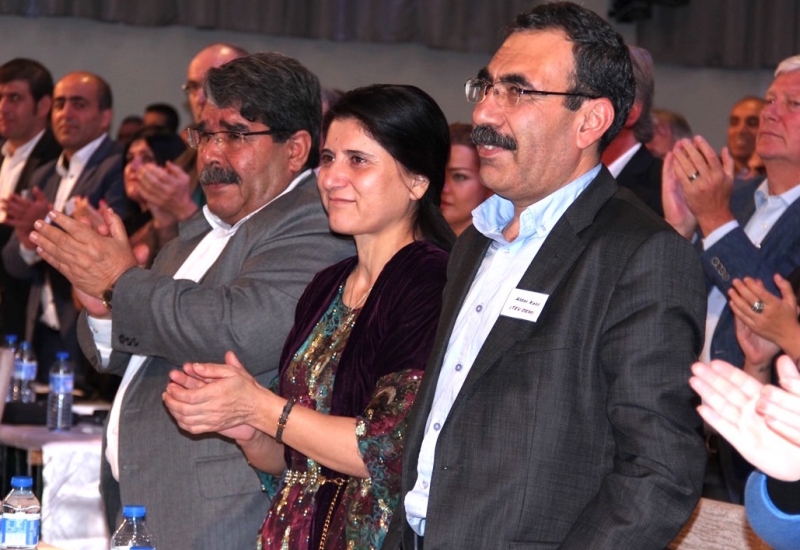 Figen Gunes: There are criticisms that Rojava’s leaders are not working enough towards cooperating with the International Cooperative Movement. What is the economic situation in Rojava under the current border isolation?

Asya Abdullah: One of our main economic obstacles is the siege; we are literally landlocked. Borders are closed due to Daesh, Turkey and Iraq. We don’t have any communication lines because of Daesh and the border crossing with Turkey is also closed. Moreover we don’t have an open path to Northern Kurdistan [Turkey’s Kurdish region]. It’s difficult for us to secure the economic future of Rojava. If there was trade, it would get better and we would have exports and imports. But that’s not happening because of the siege.

Another thing is that we are at war and there is no infrastructure. Some of our towns are destroyed. In Kobane 3,800 houses were reduced to rubble. There is no shopping area in Kobane which makes life difficult. Recently there was a big lorry explosion in Qamishlo, which Daesh took responsibility for. Attacks like this make daily life unsafe for us. For this reason, there has not been much economic help for Rojava.

In Kobane, there is support provided by organisations. But that has its own limited capacity. There is official international aid for other parts of Syria but not for our part. So far we have only had civic support from organisations.

Economy and health is essential for us in the movement. We are depending on our own resources so improve them. For example, we are developing the system of cooperatives in Rojava. A lot of cooperatives have been formed by women. A good number of women are working within them. Some of them are focused on trade, agriculture; others are for helping others find work in cooperatives. Around 50 people come together to start a cooperative.

We are improving the cooperatives system as much as we can. One thing we like achieving is bringing cooperative members together for solidarity. This empowers people and helps them see their own capacities for future projects.

F.G: Are you in talks with the Kurdistan Regional Government (KRG) to lift the border blockade from their side?

We receive help from charities in South Kurdistan but not from the government itself. We held a conference in Europe for the reconstruction of Kobane, but again we didn’t receive any help from the Kurdistan Regional Government.