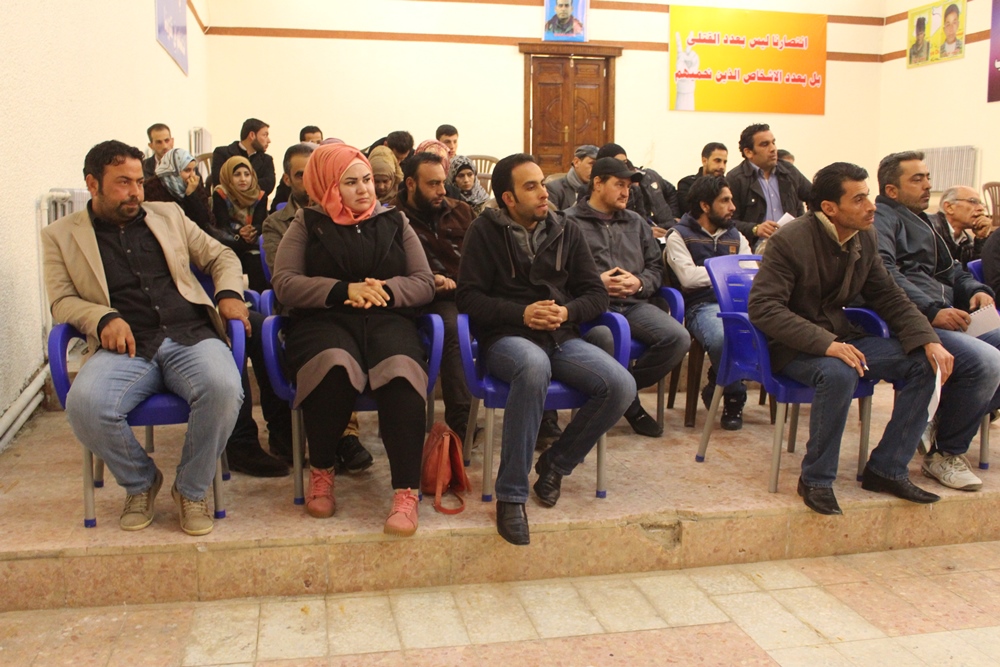 The Economic Committee of The Tabqa [Tebqa / Al-Thawrah] Democratic Civil Administration held a meeting which was attended by the Administration of Co-operative Societies in Northern Syria. They talked about the importance of establishing co-operatives and other communal economic projects in that region.

The meeting was held at the Academy of the Democratic Society. Attendees included Sarxabon Hasan, an administrator of the Co-operative Societies of Northern Syria, Ali Hamidi, a co-chair of Tabqa’s Legislative Committee, Iman Khalaf, co-chair of the Economic Committee, and many other co-chairs from administrations representing industry, trade and agriculture.

Sarxabon Hasan, co-chair of the Co-operative Societies of Northern Syria, blamed feudalists for the collapse of the communal economy. He said, “We should recognise the diverse methods of economy and their importance in improving the economy of the region and building communities. Let’s admit that feudalists have been controlling the economy of the region, monopolising and enslaving other members of society. Feudalism is the main cause of economic deterioration in the region.”

Hasan showed his confidence in people’s ability to overcome their economic dependency on feudalism. He said, “We can form a system of governance and hire employees and civil servants, but it is still some form of authoritarianism, and this thing should be totally rejected. We are working to activate communal projects and co-operative societies, people should participate to make decisions and plans. Co-operative societies will organise and include all people, and bring them together around co-operative and ethical values.”

The Economic Committee of The Tabqa Democratic Civil Administration has already formed a co-ordination committee to develop the communal economy.

Hasan also said, “The region needs a communal, political and ethical economy, and today it is the hardest thing to accomplish, but once accomplished, it will become the most successful form of economy. We will learn from co-operation and build a stable economy in a way that helps people become autonomous.”

“Building and improving the economy should be done in an ethical way, and we need to improve the economy in order to build a free and healthy society.”

Iman Khalaf, the other co-chair of the Committee of Co-operative Societies in Northern Syria, said, “We need to co-ordinate to give an all-inclusive view of the importance of activating co-operative societies and building communal projects to support the industrial, social and agricultural projects.”