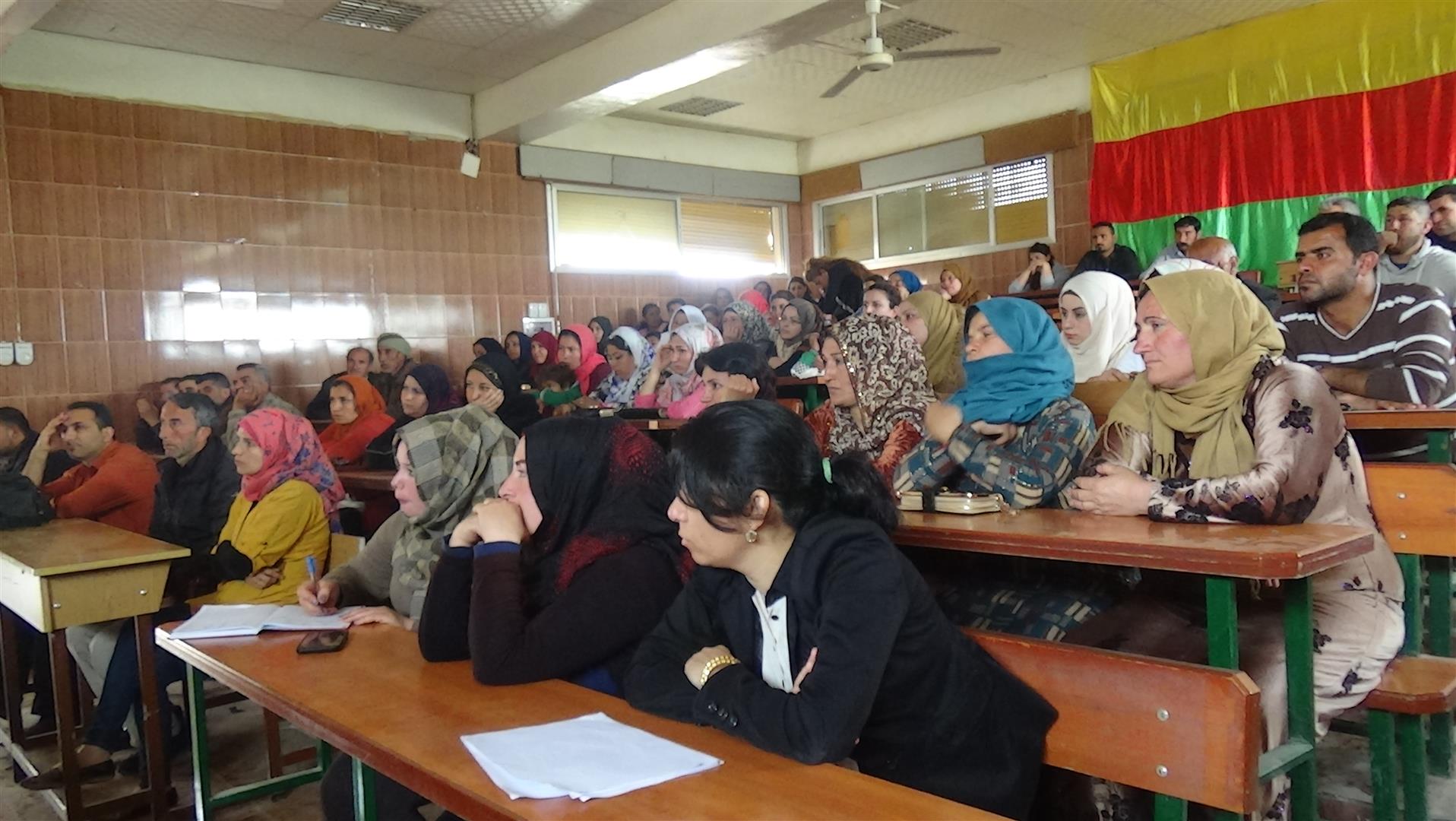 The members of The Poultry Cooperative Society in Hasakah [Hesekê / Hesîeç / Al-Hasakah] elected a temporary board of directors consisting of eight members, both women and men, in a meeting. They also discussed and read the proposal for the project.

The Al-Hasakah Agricultural Council, which is part of The Economic Committee in Jazira Canton [Kantona Cizîrê‎ / Cezîre], announced the start of registration for the poultry project on the 18th of February. It’s a project near the town of Twina, east of the city of Hasakah. The project relates to poultry farming, making poultry feed, land treatment and planting fruit trees on 2,100 dunams [decares] of land. The price of each share is 25,000 SYP [Syrian Pounds].

The Hasakah Agricultural Council held a meeting for the participants after their number reached 240, in order to regulate the work of the project and, and allow participants to become familiar with the project.

The meeting was held in the Rojava Youth Hall in the Al-Kallasah neighbourhood, in the north-eastern part of Hasakah, and it was attended by the participants in the project as well as the administrators of the Agricultural Council.

The meeting started with a minute of silence, then engineer Imad Muhammed, a member of the Agricultural Council in Hasakah, gave a speech. He pointed out that their objective should be to develop the communal economy, achieve self-sufficiency and strengthen the relationship between people in the region through their participation in the projects. He said, ”Our priority is to invest our skills to the service of the people suffering from the siege that is imposed on this region, and the high prices of food products. That’s why we have started this project, which will satisfy the needs of the region for meat, eggs and fruit.”

Imad Muhammed said that the Rojava revolution is not only a political and military revolution, it is also an economic revolution that aims to develop the communal economy. He said, ”We should be aware of the importance of the work that we are doing, and that it improves the economy of the region.”

Imad Muhammed concluded his speech by addressing the participants, and asking them to have a sense of responsibility and to develop the project to serve the society.

Sherin Abbas, an administrator in the Hasakah Agricultural Council, read the proposal for the poultry project and explained its details.

At the end of the meeting the board of directors of the poultry project were elected, consisting of eight members, half women and half men: Aldar Khalaf, Imad Muhammed, Uthman Muhammed, Cihad Hasan, Diab Ibrahim, Amal Blidi, Nisrîn Osî and Ramziyah Khalil.