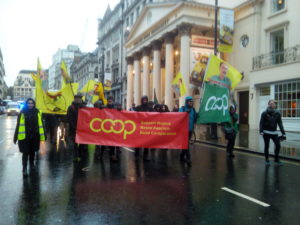 The largest show of political solidarity by UK co-operators took place in London on Sunday 27 January when a ‘co-op bloc’ was formed as part of a demonstration in support of the Rojava Revolution and Kurdish population of Northern Syria against attacks by the Turkish state. 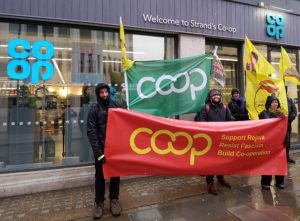 Northeastern Syria’s (commonly known as Rojava) co-operative economy started growing as a result of the bottom-up democratic system being developed as part of the progressive Rojava Revolution that was declared in 2012. There are now hundreds of co-ops operating across Northeastern Syria, a growing number of which are women-only co-ops.

Jo Taylor, project coordinator for the Solidarity Economy Association’s Co-operation in Mesopotamia project, said: “Rojava is now under threat of a full-scale attack and invasion from Turkey, which would mean an all-out war. Turkey’s president Erdoğan has threatened to crush this progressive revolution, invade and occupy Northeastern Syria. There are calls coming from all related democratic structures in the region, and internationally from the diaspora and solidarity groups, for people all over the world to rise up in defence of Rojava and its values of direct democracy, gender liberation and ecology.”

Cath, a co-operator from Leeds who attended the demonstration, said: “While the UK co-op movement has in recent years shown masses of financial solidarity with fellow co-operators around the world struck by natural disasters, this is the first time in decades that anyone we’ve spoken to can remember a show of political solidarity, in particular a co-operative bloc on a political demonstration (though we’d be keen to hear of other examples!).”