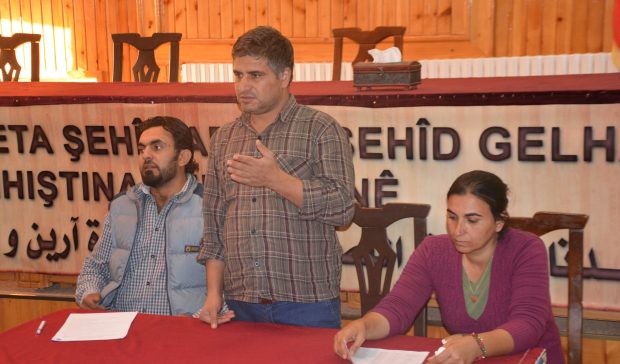 The Economic Council and the Women’s Economy Council in Kongreya Star, in collaboration with the Agriculture and Livestock Centre in Girkê Legê, began to hold a series of meetings for the people of the city of Girkê Legê and the villages and towns belonging to it, in order to form agricultural cooperatives to prepare for the new agricultural season.

So far, three meetings have been held in Girkê Legê, the town of Jel Agha and Alya village. During the meetings, six agricultural cooperative societies were formed.

At the meeting which was held yesterday in the city

of Girkê Legê and was attended by many people in the city, TEV DEM [The Movement for A Democratic Society] coordinator Adnan Ibrahim talked about the importance of cooperative societies in promoting and developing the economy and promoting the culture of cooperation at work.

During the meeting, Shivan Deli, the coordinator at the Center of Agriculture and Livestock in Girkê Legê, read the internal system of cooperatives.

Also during the meeting, two agricultural cooperatives were formed with 40 members each, and an administrative body was elected for each cooperative society.