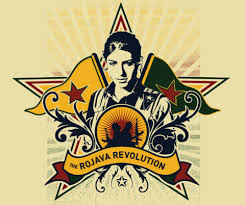 Because of the closing of the borders, getting to Rojava has become more difficult in the past few months. The Turkish border has been closed for years, while the eastern border to Iraqi Kurdistan has more recently been shut down by petrol-president Masud Barzani, who is hostile to the PKK and the PYD, and acted at the behest of Turkey. Nonetheless, comrades continue to arrive from all corners of the world to fight the Islamic State, take on roles in the revolutionary process, produce independent news about what is happening or simply learn from the processes taking place. Rojava represents a testing ground where spaces for social change are opened. This is all happening in a region in which multiple capitalist interests and reactionary visions are at play, a region destroyed by an international war as much as a civil one.

The interview that follows was carried out with a European comrade, someone who comes from that vast archipelago of political collectives, squats and social spaces that, in Europe, has been labelled with the serious but apparently unavoidably misunderstood term “the movement” since the seventies. The problematic character of the question of naming something a “movement” seems all the more dark to the observer of the development of a real movement not only in Rojava, but also in Bakur, in Turkey (as well as in many other regions of the world). This doesn’t only affect the international comrades who go to Kurdistan and who get involved in the revolutionary utopia; politics in Europe are also affected. In Europe, we are organised in ways that have theorised the failure of this kind of utopia over decades. Our theories have worked to eradicate certain utopic concepts, considering them harmful or impossible to put into practice in the contemporary world.

For these reasons, as well as being clearly important to directly support the Rojava revolution and learn from the developments there, it is important to stimulate a political debate that works with thorough, first-hand information and does not content itself with the usual habit of filtering out what is distant, original, unpredictable and unexpected – pushing it away as the “already thought”, the “already theorised”, “already known” and “already defined “- all these are ways of thinking that characterise the atavistic positions of many European comrades. It emerges from the following conversation that many comrades who went to Rojava experienced a sentiment of shock – their certainties were shaken and their most deeply held political beliefs were called into question. These are precious transformations.

Why did you decide to come to Rojava ?

For the revolution. What is now happening in Rojava is something that I previously thought impossible. There was the example of the Zapatistas in Chiapas, but that was a revolution characterised by very specific elements, for example the fact that it was an indigenous community. Here, we have a revolution that is at the centre of the international community, a revolution trying to create a system adapted to a diverse world. That’s what I’m interested in: learning what I can.

Where exactly does your interest lie?

Some are interested more in the philosophy and the theory of the revolution; personally, I’m more interested in civil society and the steps taken to transform society. It’s a good system, which starts at the commune. But it’s not enough, it is not a guarantee that the revolution will finally be present everywhere, because there are still many people not used to this structure.

Many people who do not use the communes?

What is your background?

In my city in Europe, I am part of a project where around 200 people are involved in a neighbourhood in the city centre. Our idea is to gradually make this an autonomous quarter, creating logistical services. We have a construction cooperative; we provide professional training for workers; we collect money for those in financial difficulties. Earlier, we had a collective that tried to provide education for children together with a group of families. One of the major problems in Europe is that there are many purely residential areas, with people commuting to and from work.

We used to have a cooperative that produced ecological food. The problem was that of course this type of food production made increased the prices, but we wanted to keep things affordable, since our main objective was the social sphere in the neighbourhood. We also had a people’s library about politics and cooperatives. We have a single goal: to make the neighbourhood autonomous and to unite the people.

There are commonalities. The idea behind everything is the same. Here, things are more advanced in some areas. What is good is that they have the power to develop their system across the whole of society. We, on the other hand, have a different capacity to invent new things. The communes here function based on internal committees that take care of specific aspects. The structure is rigid: you do this, you do that, and everything is organised. Our project is very similar, but we have a more open structure where we can think about how to create cooperatives. We don’t have to talk with ministries about how to proceed, etc. [This is a reference to the concessions that the system of Rojava has made to the autonomous structures of Rojava, such as the Executive Council and its sub-sections that are analogous to ministries.] The cadres in Rojava outline their ideas, but it is clear that what is now going on in Rojava is still far from this imagined utopia. Yet they think that the most useful way to reach it is to go through the current processes.

What is your opinion on this?

I agree with them. Everywhere in the world, we are oppressed, in Europe as well as in Rojava. I am an anarchist and initially, I did not like this mega-structure. It reminded me of Marxism. But then I learnt more and I understood their logic. There are two ways of doing things: destroy everything all at once─and then you only have a very small chance to succeed─or a gradual process: that’s what they are applying in Rojava─so far successfully. Most people in the world do not worry about changing the status quo. I have started to think about these things and now I also think that carrying the revolution forward into society at large is the best way.

It is clear that the cadres of the Tev-Dem [Movement for a Democratic Society, a union of various social organisations and parties in charge of the transformation of Rojava] and the ministers or party members are very aware of many things; but ordinary people are not, so they need to be informed and educated. It takes time.

What is the attitude of the other “internationalists” who are in Rojava right now?

No one particularly finds fault with this revolution, but the problem is that in Europe we are told that this is an anarchist revolution, although this is not true. It is actually a mixture of Marxism and Anarchism. Doing things step by step and building a structure from which to change society─this is a Marxist idea. At the same time, the current system applied by our comrades, in which power goes from the bottom up and not vice-versa, is different from the Marxist idea of a “dictatorship of the proletariat”. Still, for the anarchists who came here, it was a sort of shock.

Yes, because in Europe there is no clear information about what is happening. People form simplified ideas and expect an anarchist revolution, but upon arrival they see that things are not like that. Some internationals also do not accept this.

Do you think this is the only way to proceed with a revolution, or would there be other ways?

In theory, it’s not the only way, but in practice, yes. I don’t know if what we imagine in Europe is possible, because we have no real-life experience of it. Yet, what is happening here definitely works. If we want to carry out a revolution in Europe then this is a good way. You have to participate in the processes and then also have a critical point of view, that is the beautiful thing about it. Here the cadres act and take care that there are no hierarchies; that is their task. But at what point and to what extent can the revolution be delivered into the hands of the people?

Let’s take an example: the Department of Justice is a positive element. Although their task is to carry out trials and to sentence people, they say they want to dismantle the criminal system─that is, the ultimate aim is to create a society that can solve these problems at the local level, at neighbourhood level. In Europe, on the contrary, problems are created with a view to justifying and preserving the criminal system or even making it bigger: human “evil” is necessary for capitalism. Changing this culture is only the beginning. Afterwards, we need to upend the whole concept. This process can be slow or fast, the important thing is to have a strong ideological basis underneath everything.

What would you say to European comrades who are in Rojava as a general message?

People do not know anything about the political revolution in Rojava and Bakur. It’s not the first time in history that the situation is like this; other revolutions died because they did not get support. It is important to be interested in what is happening here and to support it. I don’t know how, but this is an important moment. The world is in crisis and war, but for Rojava this is a great opportunity. We must adapt this revolution to our own countries.

It’s not important whether you are communist, anarchist or socialist, the truth is that in Europe we only really “play revolution”, we have these “pub revolutions” and these small wars between anarchists and communists; all that is useless and it creates nothing. If we stay too closed minded about our own ideas, we will construct nothing. This revolution here is neither communist nor anarchist, but it is a good revolution. Criticising what happens here because Bakunin or Lenin wrote something different is like criticising the football coach from your arm-chair in front of the television with a beer in your hand. It is counter-revolutionary.

[From the correspondent of Radio Onda d’Urto and Infoaut in Rojava, Syria]