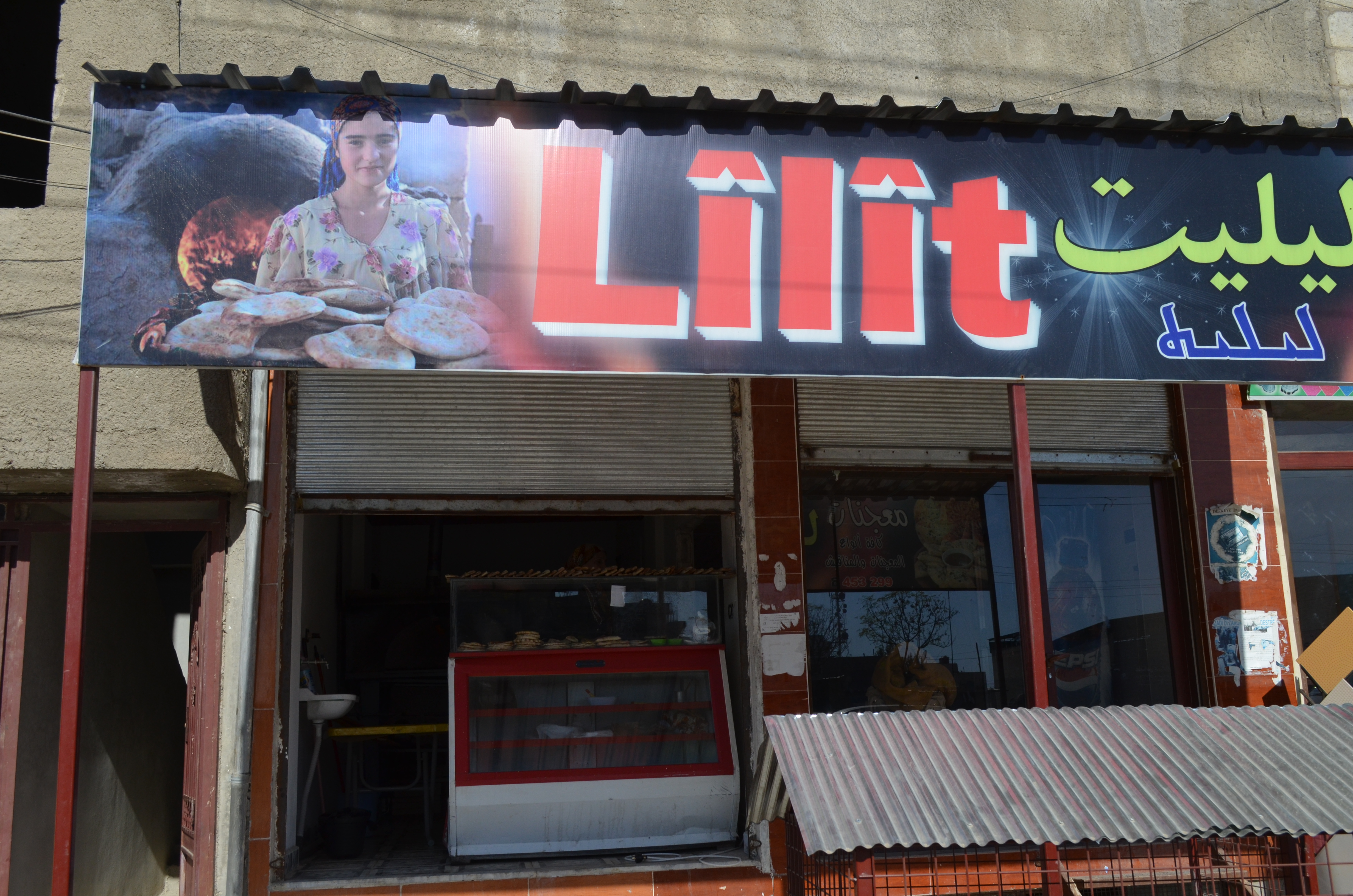 The Women’s Office in east Qamishlo [Qamişlo / Qamishli / Al-Qamishli] has opened a bakery called Lilit to make pastries and manakish. The opening was attended by many of Qamishlo’s residents, as well as members of Kongreya Star [the women’s movement umbrella structure], local councils and institutions of civil society.

We headed to Qamishlo’s eastern municipality to get more information, and we met the administrator at the Women’s Office, Mihan Hasan, who spoke to us about the aim of this project. She said, ”The Women’s Office in the municipality is supervising the projects relating to women in the neigbourhoods of east Qamishlo. We’ve been preparing for this bakery for the past six months, and we opened it on Saturday the 3rd of December. Many people attended the opening. In the beginning, we were a bit worried about the success of the project, and thinking that this project is new for women, but we have proven that women have the potential to succeed wherever they work. The aim of this project is to develop and revitalise the women’s economy in Rojava and to help needy women and who have lost their husbands. Projects like this can create jobs for women. It is not only about money, but also to prove that women can work in all fields and can develop community.”

Mihan added that they, in the office, select the workers through Kongreya Star and the communes, by looking at their social situation.

Teamwork motivates them to advance the project

Later, we went to the bakery to find out more about how it works, and we met with some workers who expressed their happiness to participate in this project that is exclusively for women. A worker named Iman, who is a refugee from Damascus, told us, ”The workers here are only women, and this idea is new and innovative. The women haven’t been in a similar project before. I joined my friends and I think that the start of the project is going pretty well so far. It’s normal for a new project to face some difficulties, given the fact that we haven’t worked in a similar field before, and we are going to surmount those difficulties and go ahead with our project.”

Another worker, Jalila Ali, talked about her role in the project: ”I applied for work in the municipality of Al-Sharkiyah in Qamishlo. My situation and need for work was studied, and I was accepted as a worker in this project. I am so happy now with this project because it opens the door for us to prove that we are able to work in all fields”.

Rojeen Qasim, another worker in the project, said, ”I am a mother of four, and I needed this job a lot, so I applied for it in Al-Sahrkiyah municipality and I was accepted. I am so happy, because now I can raise my children without asking for help from anyone. I noticed that working strengthens a woman’s personality and unleashes her potential and abilities for change and progress in all fields.”

Samira Muhammed, another worker in the project, talked about the working hours: ”We start at seven o’clock in the morning and work until one. First, we make the special dough for bread and heat the oven, and because we are still new for this work, a temporary worker shows us how to operate the machines. We have divided the work between us; two of us cut the dough and spread it, and the other two make the filling with cheese, muhammara and za’atar, and bake it.” She added, ”Honestly we, as women, have proven that we are able to manage our work by ourselves. Considering the fact that we used to rely on men for everything, we are doing really well with the things we are doing now.”

Lilit is one of many projects that the Women’s Office is working on in Al-Sahrkiyah municipality. Administrator Mihan Hasan told us that one of the other projects being studied by the office is a new project for women who suffer from breast cancer.