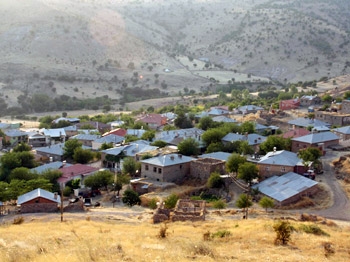 People who live in Kürmes village in the Dersim region solve their problems with collective structures. In the village of 100 inhabitants, there are three different committees, which are mostly made up of women. These committees are tools of collective decision making on all topics which may arise, such as roads, water, nature and environmental protection, the economy or human relationships.

In rural Dersim, communal lifestyles continue to exist. In the Pêrtag (Pertek) district of Dersim, in the small village of Kûrmes, people have been solving collective problems through committees for 25 years. They decide on solutions to things like infrastructure and poverty, as well as in the case of natural disasters and other emergencies. The structures set up in Kûrmes are seen as a good example by other villages in the area. Asiye Erarslan, a member of one of the committees, gave us more information about the communal work being done in Kûrmes. She said that all traditional rules that were making life difficult for people in the villages had been replaced by more modern and humane guidelines. “At the moment, all decisions about problems and needs are taken in committees. That’s how we run the village”, she says.

25 years earlier, the village committee at the time had decided to abandon goat-herding, because it was damaging the nature in the area. They moved the animal shelters outside the village, because the stables were harmful for people’s health. “Because the villagers have not kept goats in 25 years, now the forest around Kûrmes is the densest forest in the area“ says Erarslan.

If domestic violence, or another form of violence against women occurs, it is a matter of course that heavy penalties are applied. Erarslan says, “The head of our village is a woman. Most “institution” leaders are also women. Women have as much to say about the future of our village as our men. If there is violence against a woman, the village committee comes together and the perpetrator is punished according to Alevi customs. For example, three months earlier, the person who manages the tea-house and the village shop had been drinking alcohol at the home of a friend. He harassed a woman when drunk. Therefore, it was decided that the tea-house and the shop would both be closed for three months. In the Alevi belief, nobody should speak to a person who has committed an injustice during their punishment. Because this man harassed a woman, no-one spoke to him for three months.

A high degree of solidarity

We spoke to Türkan Güneri, a member of the village committee for environmental protection. She told us that it was forbidden to throw rubbish outside, or to let animals roam freely in the surroundings of the village. “We put our rubbish into plastic bags and burn it once a month on a designated place at the edge of the village”, she says. She affirms that people in the village don’t have many difficulties anymore, because there is so much solidarity. “We give money to those families who have someone in prison. For this we collect donations from people in the village here, or from relatives in Istanbul or Europe. Our village committee also takes care of organising funerals for those living outside of the village”, she added.

She explained that they had patented the tulum cheese in their village, and that it was the women who produced that cheese. She also said that the women were working on opening a cooperative for beekeeping in the village. “We are fully capable of succeeding with that as well”, she declared.