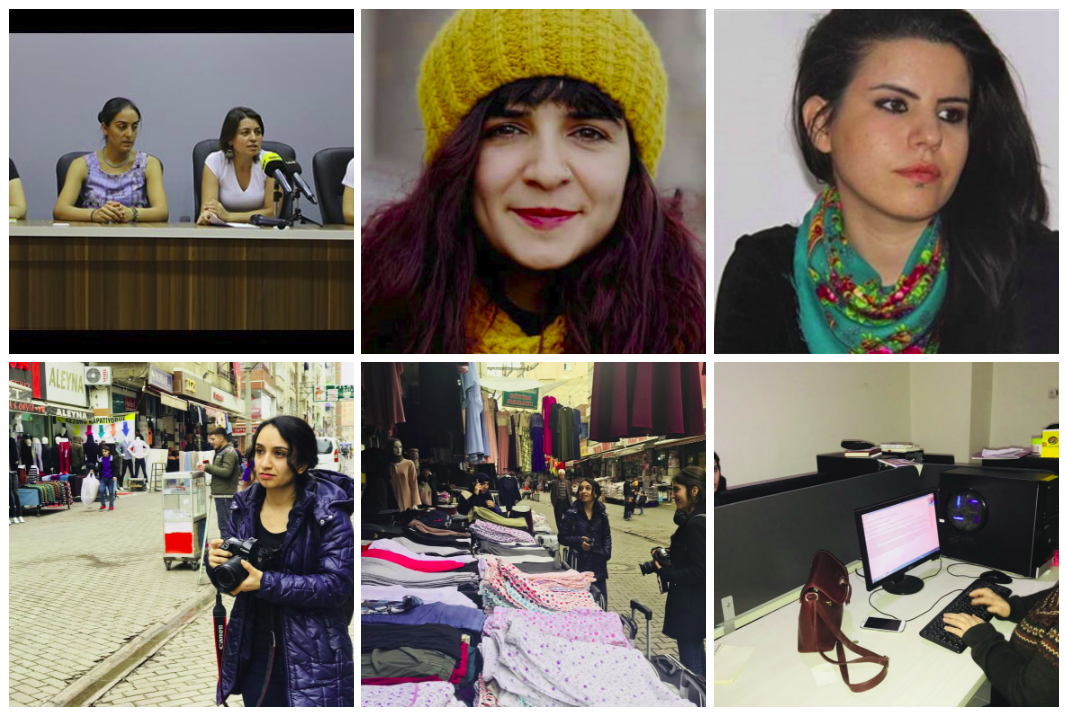 Kurdish women at Turkey’s only feminist news website, Jin News, and elsewhere are taking a new approach to journalism. This being Turkey, they haven’t escaped pressure: Many have been detained, put on trial or threatened.

The only online feminist news website in Turkey is marking International Women’s Day under state censorship. Access to the website of Diyarbakır-based Jin News (“Jin” meaning “woman” in Kurdish), which is entirely run by women and specifically focuses on news relating to women, was blocked seven times within just one week at the end of January. At present, the site is inaccessible from Turkey.

The pressure, however, hasn’t discouraged Jin News’ journalists. “We have always shown that we have alternatives, and we are continuing to show it,” Jin News Editor Beritan Elyakut told Index on Censorship. While relying on social media and the use of VPNs, Jin News announced a new TV channel to mark the symbolic day, which has a double significance for them. JINHA, the first news agency run by women in the entire country, was also established on an International Women’s Day six years ago.

Pressure was no stranger to them either: They were shut down not once but twice, more than any other news outlet in the country under the present state of emergency. First, JINHA was closed by decree in October 2016. Gazete Şujin, JINHA’s successor, was only allowed to exist for nine months before another decree ordered its closure in August 2017.

But still, from its ashes, Jin News was born, taking over JINHA’s legacy: a style of news writing that presents women “as subjects, not objects.” The site takes care to use conscientious language, such as using the word “murdered” instead of “killed” to emphasise male violence. They also avoid highlighting details that indirectly justify violence against women (by refusing, for example, to note that she was seeking a divorce) or providing unnecessary descriptive details in cases of sexual attack. Then there is the strict use of first names instead of family names – a practice adopted by the present article to provide a glimpse of their methodology.

“When covering women, we had to think until the smallest details. We chose not to employ the family name to break the perception that family lineage descended from men. If we say ‘Beritan Elyakut’ in the beginning of the article to introduce a person, we then use the name distinguishing that person as a subject,” Beritan said. Even the highest-ranking officials, including two former co-chairs of the pro-Kurdish Peoples’ Democratic Party (HDP) who are currently under arrest, Figen Yüksekdağ and Selahattin Demirtaş, wouldn’t escape the rule.

This also meant a different approach in the choice of topics. “We don’t just cover news on sexual attack, sexual abuse or harassment. We started to cover stories reflecting women as strong individuals. We reported on pioneering women. We focused on economy and ecology. We made women visible in politics, highlighted them and gave them a voice,” Beritan said.

Encouraging women to speak up

To ensure that women’s voices are not muted, Jin News uses exclusive testimonies and quotes from women in their reports. As she walks to the popular market of Bağlar in Diyarbakır, reporter Şehriban Aslan tells Index on Censorship that women’s reactions are always very positive when they introduce themselves as a Kurdish agency covering women.

Once she arrives at the market, Şehriban and her colleague, Rengin Azizoğlu, walk quietly as they search for women running stores. The subject is the destruction of a community health centre, which was turned into a police station by a government-appointed trustee after the municipality’s democratically elected co-mayors were thrown in jail.

The effect is immediate as they enter a gift shop. One of the vendors agrees to be interviewed. “There is this perception in society that a woman can’t work. You’ve broken it,” Şehriban tells her. “Absolutely,” the woman answers, without a flinch of hesitation. As the interview nears its end, Şehriban asks her if she has any messages to other women. “Women should absolutely work,” she says. “They shouldn’t submit to men.”

“Women feel comfortable and confident when they speak to us,” Şehriban says. “Being a Kurdish agency also helps.”

“Which outlet are you from?” a man asks her as she sneaks out of a shop. “We are the free media,” Şehriban says, using the expression that Kurds refer to their own media outlets. “Ah, you are more than welcome,” he replies.

Münevver Karademir, Jin News’ Kurdish-language editor, also stresses the importance of the encouragement factor. “When you give them confidence to express themselves, women embrace you,” Münevver says. “When you tell any shop vendor ‘I am an agency run by woman who works on the problems of women,’ her attitude becomes very different. She feels safe. She is able to tell you what she is going through.”

Jin News journalists are also eager to expand the know-how they are building with other outlets, especially male journalists. They have a project to prepare a dictionary on non-discriminatory news language. “We were planning to come together with men and organize training on ‘how to design a news story’ and ‘how to use women-friendly language in news articles’ but haven’t been able to due to the conditions [in the region],” Beritan says.

However, their mere presence has already started to raise some awareness. “Some journalists, men most of the time, ask us: ‘Would you check this story and see if we have used correct language?’ They now feel that concern,” she says. One of the most important successes for Beritan has been to show that women were more than capable of doing journalism – often better than men. “We saw that women were fast as well. But their speed also seeks to share a story in the best way possible. They were meticulous.”

According to Beritan, Jin News’ policy of collecting women’s voices alone was more successful in the east than the west of Turkey. This is the result of the strict “co-chair parity” policy launched by the HDP, which ensured that women assumed senior positions in Kurdish municipalities. However, after trustees occupied most HDP-led municipalities, Jin News not only lost its interlocutors – most trustees are men – but lost an important source of revenue. Indeed, many women co-chairs ensured that the municipality subscribed to their services and encouraged the agency’s activities.

Since the military crackdowns in urban centers in the region, journalists have become a target of state security agencies, and arrests and detentions have become common practices.

“The state wanted to seclude us at home through detentions. When that didn’t work, they tried to shut down the outlets entirely,” Beritan says as she learns that one of their reporters, Durket Süren, has been charged with “membership in and financing of a terrorist organisation” after being detained a few days earlier at a routine checkpoint. Durket was eventually released by a court but was subjected to a travel ban and ordered to sign in regularly at a police station.

Durket is hardly the only Jin News journalist facing criminal charges. Former JINHA reporter Zehra Doğan is currently serving a two-year, nine-month prison sentence for “spreading propaganda for a terrorist organisation.” She was convicted for publishing the testimony of a 10-year-old girl affected by the Turkish military operation on the town of Nusaybin in an article from December 2015. Also a painter, Zehra received jail time for “drawing Turkish flags on destroyed buildings” in a painting copied from a real photograph in which Turkish flags can be seen on buildings destroyed by Turkish forces. Beritan Canözer, the agency’s Istanbul reporter, and Aysel Işık have also served prison sentences. Many have been detained, and about 10 reporters are currently on trial. The agency also receives regular threats.

Ayşe Güney, a reporter for the Kurdish Mezopotamya Agency and spokeswoman for the Mezopotamya Women Journalists Platform, told Index on Censorship that state violence has become routine practice. “In a province like Şırnak, our reporters are constantly subjected to verbal harassment or threats. Many avoid going alone to villages or certain neighbourhoods. They are threatened, from being kidnapped to being abused or raped. Threats may be verbal for now, but there is a serious attempt to intimidate them,” she says.

The platform was established in 2017 on another symbolic day, May 3 Press Freedom Day, to ensure that women can fight together against common issues. Those include social issues – such as unemployment after the repeated closure of Diyarbakır-based Kurdish media outlets – but also against all kinds of violence. “Thanks to this association, we wanted to help our friends who are detained, arrested or subject to harassment from sources, attacked or abused by the police. We also wanted to make the pressure visible,” Ayşe says.

The latest woman journalist to be arrested by police is Seda Taşkın, who was reporting a story in the province of Muş. Seda was first released on probationary conditions, only to be arrested a month later in Ankara due to her reporting and tweets.

According to Ayşe, it is no coincidence that the women’s journalistic experiment began in Diyarbakır and not – as some might have expected – in Istanbul. “Our people know how to live under difficult situations. Kurdish women know how to resist. JINHA was closed, and Şujin was created. Şujin was closed and Jin News was created, which means we can reinvent ourselves over and over,” Ayşe says. “We are speaking here about women’s freedom and not gender equality. This is something that goes way beyond it.”

Ayşe also said she wished to make a call on all women journalists in Turkey to engage in solidarity. “There are almost no journalists here who haven’t had a trial opened against them. Either they have been in and out of prison or have to report at a police station every two or three or even five days. This means they can’t leave the city, which is becoming an open-air prison,” Ayşe says. “But it doesn’t happen only to Kurds anymore. It happens everywhere. So this is the time to act together.”