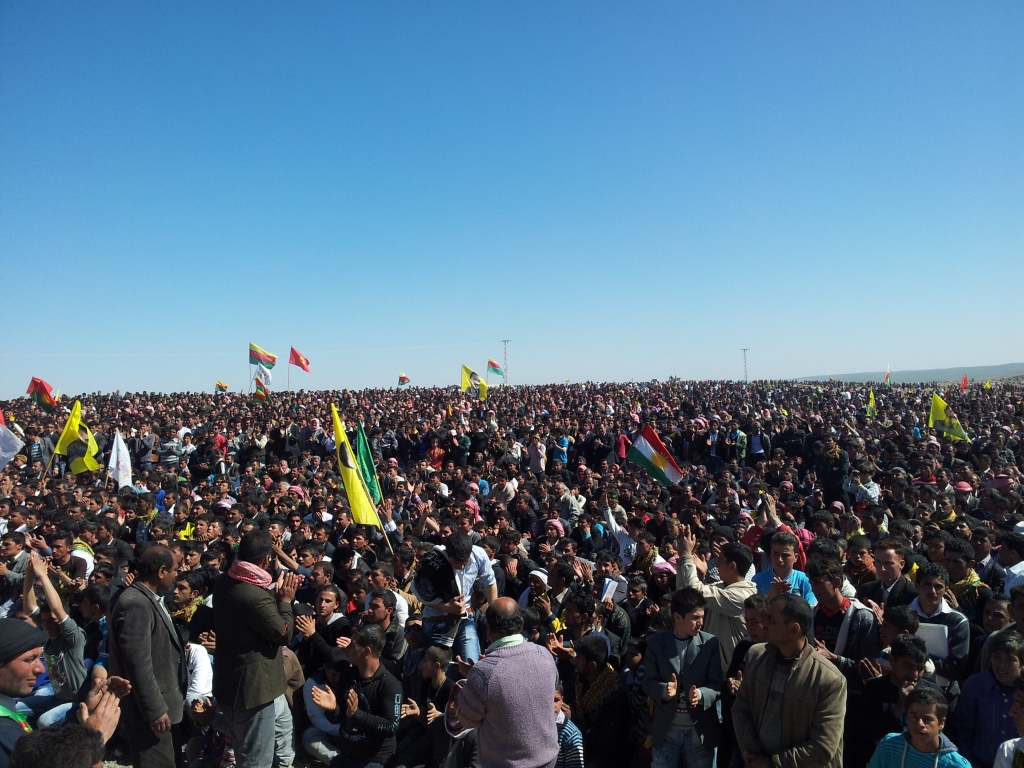 The July 19th Revolution, whose spark started in Kobanî [Kobanê / Ayn al-Arab] in 2012, soon echoing in the region and the world, has achieved considerable victories on the military, political, and social levels during the last five years ─ achieving unique progress in leading the community towards democracy and federalism, perceived by observers as the best solution not only for Syria, but also for the stalemate in the communities of the Middle East.

Rojava’s components of Kurds, Arabs, Syriacs, Assyrians, Caldeans, Turkmens and Circassians have all taken part in the Rojava Revolution, which broke out on July 19th. Hand in hand they have established a democratic, cooperative system aiming to find a solution to the obstacles put down by the hegemonic powers, capitalist regimes and nationalist states.

Due to the oppression and despotism Arab peoples in the Middle East have lived under, in 2011 the spark of the Arab Spring broke out from Tunis, reaching then Algeria, Libya, Egypt, Yemen, Bahrain and Daraa, revolting on the dictatorial, chauvinist Baathist regime which had taken hold of the country, including the Rojava area.

The Syrian Revolution was derailed by external interference, which aimed at undermining the revolution and overthrowing the Baathist regime.

The situation having reached this point, Kobanî was liberated from the Baathist regime to protect the Rojava area in 2012. Soon after the July 19th Revolution overwhelmed Rojava’s cities, developments began on the organizational side, and institutions were opened.

On the military level, the victories were more remarkable in Rojava: People’s Protection Units and Women’s Protection Units (YPG, YPJ) were announced on July 19th 2012 in a statement by the YPG and YPJ, which enjoyed wide popularity in the area due to the victories they achieved. On July 24, 2012, Asayîş Forces were formed, then Civil Protection Units (HPC), Self-Defence Duty, and Syrian Democratic Forces were formed on October 10 2015 comprising many forces like Manbij, al-Bab, Jarablus, Deir ez-Zor, and now al-Raqqa Military Councils.

The spark of the revolution came from Kobanî

In 2011, secret preparations were made to organise people, and protection committees and councils were formed. One of the protesters in Kobanî at that time, Sadiq Aldmir, said, “Since we took to streets in protest, we have always adopted the “third line”, though people were not much convinced of it. Our protests marched in side streets; on the main streets other protesters suddenly appeared as co-ordinations much bigger in number. Still, we insisted on protesting till we reached the main streets in the city”.

Despite having very little, people were in high spirits and worked day and night.

Kobanî Canton’s head of Defence Body Ismet Sheikh Hasan remembers those days: “First of all we started by taking control of the city entrances, and people began establishing checkpoints on roads, standing for five hours, though they had nothing but light arms.”

Simultaneously, people took to forming councils and courts, Ahmad Sheikh, the TEV-DEM Co-chair said, “On January 13 2012 we formed the first council in Kobanî, which is considered a victory to Kobanî people. Hygiene, protection, and training committees were also established despite the poor possibilities, but our feeling that oppression and despotism against us as Kurds had been eliminated motivated us to go on even stronger”.

With this spirit people managed to kick the Baathist regime out of the city and took to organising themselves and Society Protection Units were formed to protect the city from any danger. On that historic day, the spark of the July 19th Revolution spread to other parts of Rojava, and TEV-DEM flags were raised over all governmental headquarters within Kobanî and its villages.

The July 19th Revolution has achieved many victories in the military, political, and social domains in Rojava, but Kobanî’s victories were different, as it was the spring of the Rojava revolution. In addition, Kobanî also faced many attacks by the mercenaries, the last of which was IS. Still, people managed to organise themselves.

On the military level, a military force of 13 members was formed. After July 19th, it reached 200 members with light arms. Nowadays the result is a huge force of YPG, YPJ, SDF, HPC, Asayîş, and Self-Defence Forces where thousands of fighters joined, and five YPG and YPJ regiments have been formed in the canton.

Due to mercenary gangs supported by regional states, particularly Turkey, perceiving this state, Kobanî was frequently attacked. At the beginning of 2013, attacks were launched from Girê Sipî (Tel Abyad). YPG / YPJ fighters managed to repel the attack. The second was July 2, 2014; the third attack was August 15, 2014. All these attacks have been foiled by the fighters and Kobanî people’s resistance.

Impelled by their grudge towards Kobanî, the castle of resistance, IS mercenaries launched an attack on Kobanî people, targeting first civilians, and committed a hideous crime in Kobanî and Berx Batan village on June 25, 2015, leaving 253 martyrs.

On the social and regulatory level

After the July 19th Revolution and its victories in Rojava and north Syria, the main base of the federal project in north Syria has been established: starting from Kobanî, communes, villages and neighborhood councils, protection, hygiene, training, and economic committees were formed, thus establishing the cornerstone of the federal project and its implementation on the ground.

On the medical side, the Heath Body opened many hospitals to treat the sick from Kobanî and its villages, Tel Abyad, and Manbij, including 4 major hospitals in the city, the Kurdish Red Crescent’s dispensary and other many medical points in the neighbourhoods. In Sareen town there is a free hospital to treat the sick.

The second school of Kurdish language at the Rojava level was opened in Kobanî Canton before July 19th, but the is now the Pedagogy Body, Pedagogy Committee for Democratic Community, and the Teachers’ Union.

There are around 1,000 schools in Kobanî with 4,000 teachers, and the number of students after July 19th Revolution is 90,000 students of different levels.