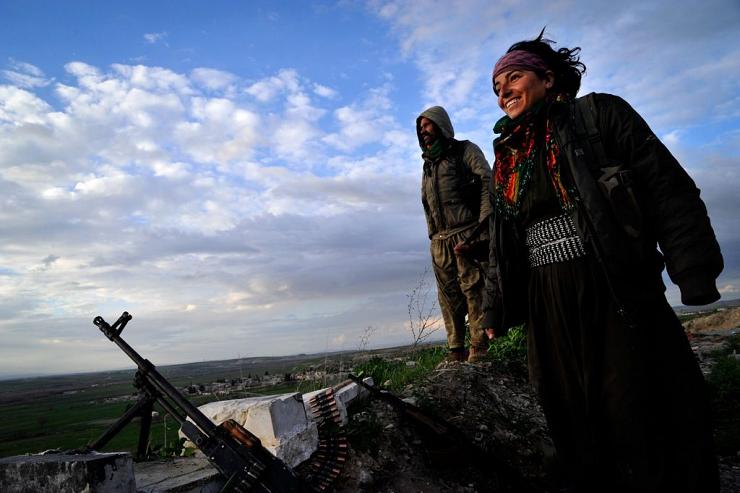 The Western media relentlessly relays decapitations, calls for murder and barbarities perpetrated by Daesh, the so-called “Islamic state”. However, in the face of this barbarity, the Kurdish, Arab and Yezidi peoples of the Rojava region of northern Syria are implementing another model of society: emancipatory, egalitarian, multi-confessional, and very democratic; an experience that could even serve as an inspiration for bringing peace to the region. Meanwhile, the Kurds and their neighbours are fighting to defend this concrete utopia, without any real international support.

There are few reasons for hope for Syria. But in January 2015, the world was amazed to discover the images of Kurdish women in combat uniform, participating in the resistance and subsequent liberation of the Syrian city of Kobanî [Kobanê / Ayn al-Arab]. A democratic and anti-patriarchal movement had defeated the ultra-reactionary forces of the Islamic state, which had so far been victorious everywhere it had sought to conquer. Two radically different models of society faced off against each other.

Since 2011, Syrian Kurdistan has been experimenting with a democratic revolution that was previously unimaginable. Having relatively fast rid themselves of the forces of the Syrian government of Bashar Al-Assad, the Kurdish liberation movement developed a political system based on direct democracy, communal organisation and the liberation of women. The region has been pushing ahead through with its project despite a series of obstacles: the ongoing war, attacks of the Islamic State, the Turkish embargo. And all of this against a background of international indifference. The Kurds put into practice a concept called Democratic Confederalism─a model society that promises freedom for all ethnic and religious groups.

Interview with Ercan Ayboğa and Michael Knapp, co-authors of the book Revolution in Rojava, an activist piece of research about the ongoing revolution in the midst of the Syrian chaos.

Basta!: Do the processes that are happening in the Syrian region of Rojava since 2011 represent the absolute antithesis to the violence of the Islamic State?

Ercan Ayboğa [1]: The Islamic State represents the most reactionary line that exists today in Syria and in the Middle East. They are even more reactionary than Al-Qaeda, and they do represent the pole diametrically opposed to the movement in Rojava. On one side there is the model society of Rojava, a democratic, emancipatory approach. On the other side, there is the reactionary, hierarchical, misogynist, absolutely anti-democratic, violent. so-called Islamic State, which exploits the local populations.

Michael Knapp: Rojava obviously resembles the absolute opposite of what the Islamic State is, but it’s a lot deeper than that. The IS is also an expression of outside forces present in the Middle-East. Retrospectively, seen from the West, you can get the impression that the movement in Rojava was born in opposition to the IS. In reality, it’s more like the IS has been propped up by forces like Turkey, with one of its goals being the destruction of the democratic project in Rojava.

How did the Kurdish movement bring about its democratic project in Syria despite the Civil War going on? Was there a compromise with the regime of Bashar al-Assad?

From a military point of view, what happened was that the Kurdish forces of self-defense circling in the military barracks of the regime, saying to them: “either you leave, or we will fight you”. Often, the regime soldiers withdrew quietly, thinking that the Kurdish forces would anyway not fight together with the Free Syrian Army. The regime thus preferred to deploy its soldiers in other places. There were only some battles around oil derricks. It is in this vacuum of power that the Rojava project began to take shape.

The members of the Syrian national coalition and the Free Syrian Army sometimes reproach the self-governing structures of Rojava collaboration with the regime. But it must be understood that the Kurdish movement follows a principle of legitimate self-defence and prioritises civilian politics. This means that as long as they are not attacked, they will try to solve conflicts politically. This is also the line followed by the guerrillas in North Kurdistan (Turkish Kurdistan).

How is political life organized in the region now?

Michael Knapp: Organisation is complex and dynamic. It adapts itself to the needs at hand. The council assemblies are the driving force behind it all. There are several levels of councils: at street-level, at neighbourhood level, at city level. Each level sends different representatives into the structures of the next level up. From the street councils to the neighbourhood councils, from the neighbourhood councils to the city councils, and then to the canton councils and the popular councils of Rojava. The communities also organise in committees on a diverse range of issues,on security, the economy, justice, etc.

The committees form the ministries at the regional level. The councils are always double: there is one mixed-gender council and one council only for women. The women’s council has the right to veto. And in all mixed councils, there is a rule for parity between the sexes, a quota of 40% less for each gender, and the principle of a double presidency is applied, there are always one woman and one man elected to these positions. If, in the city, there is a Yezidi community or Arab communities, for example, they also have the right to a co-presidency of the councils. That means there are often three or four chairs of these councils.

In parallel to the councils, a parliament exists, because there are still people who are members of political parties who must also have the right to organise and be represented. In the parliament, there are parties, but a portion of the seats are reserved for civil society organisations, associations for human rights defence, the Yezidi community, etc. Unfortunately, because of the war, it is not possible yet to hold elections at the level of the entire region to designate members for the parliament.

What is the origin of this model for self-governance and democratic confederalism ?

Ercan Ayboğa: Communalist, self-organisational structures were born in North Kurdistan, in Turkey, in 2007-2008. From 2011 on, the lessons from those experiments were transmitted to Rojava. The project of the confederation itself comes from the KCK (Union of Communities of Kurdistan), a branch of the PKK that was created in 2005. The idea was to democratise the Kurdish liberation movement, to get away from a party structure and to move toward a movement carried by the entirety of society. The movement profits from historical heritage like the Paris Commune (1871), but also from the Zapatista movement in Mexico. Before, the PKK had a Marxist-Leninist approach. The party launched discussions on Democratic Confederalism at the beginning of the 2000’s.

Does ecology play a role in this movement?

Michael Knapp: Ecology is a central point. To develop the project of Democratic Confederalism, Öcalan (the leader of the PKK, who has been imprisoned in Turkey since 1999) has used the principle of Social Ecology first put forward by the American activist Murray Bookchin. With the idea that capitalism is a system that leads to the destruction of the planet, and that instead we must build a decentralised ecology based on regional, ecological products.

What are the emancipatory structures women have put into place in Rojava? Apart from the women’s councils and the female defence forces, what else is there?

Ercan Ayboğa: In each city, there is a women’s house. They are political centres, but also educational centres where courses or seminars are held, and simply community centres where women can get advice and support. There are also countless women’s cooperatives, bakeries, milk or dairy product cooperatives, textile cooperatives, etc.

Michael Knapp: The women’s freedom movement benefits all ethnic communities, not only the Kurds, but also, for example, the Suryoye (Christians) and the Arabs. In the area close to the Iraqi border there are some very conservative Arabic groups, but they entered into conflict with the Arabic state, and asked the Kurdish fighters for help. They joined the Kurdish movement for this reason. I went to see some of these Arab battalions. They not only discussed military know-how, but also talked about women’s rights and direct democracy.

We have also met young women from the Arabic community who have joined the YPJ, the female defence forces [2]. They told us that two years ago they never left their homes. It is a huge thing that now they are protecting the border with their weapons. The confederalist model is not identitarian. That’s also why we hope it could be a model on a grander scale for conflict resolution in the Middle East.

How is the economy organised?

Michael Knapp: It’s very difficult, especially because of the embargo imposed by Turkey. In the Jazira Canton [Kantona Cizîrê‎ / Cezîre], the existing resources are oil and grain. But there is no oil refinery and almost no mills. We have grain silos full of food. It would be enough for the whole of Syria for ten years, but we cannot transform the grain into flour. But a collectivised economy is developing with agricultural cooperatives, cooperatives that refine oil as much as they can, and so on.

Ercan Ayboğa: The cooperatives play an increasingly important role in Rojava. They receive support from the councils, but private economy is also allowed; it’s not forbidden.

Does the movement receive support from abroad, from Turkish Kurdistan, Iraqi Kurdistan or from the international community?

Ercan Ayboğa: Medicine and some tools come from North Kurdistan, in Turkey. But Turkey does not let a lot of things through the border. The support from North Kurdistan is very big, however. The autonomous administrations in North Kurdistan support Rojava. The municipality of Diyarbakir [Amed], for example, has sent construction machines, engineers and technical support. But they could not do this officially. Aid from other places arrives, too, from NGOs, for example, but it’s very little. The international community says they need the approval of the Syrian government to send aid to Rojava. But the people of Rojava really would like to see more aid, because they consider that their struggle is not only for themselves, but one for the entire democratic world.

Michael Knapp: With these defence forces, the people fight to survive, they fight for their convictions and for their vision of society. Some of them fought in North Kurdistan before for a long time. They already have a lot of military experience, but their equipment is modest in comparison with what the Islamic State has, for example.

[1.] Ercan Ayboğa, activist, and Michael Knapp, historian, are the co-authors, with Anja Flach, an ethnologist, of Revolution in Rojava, published in German at VSA Verlag in February 2015.

[2.] For both men and women, the minimum age to join the self-defence forces is 18 years.