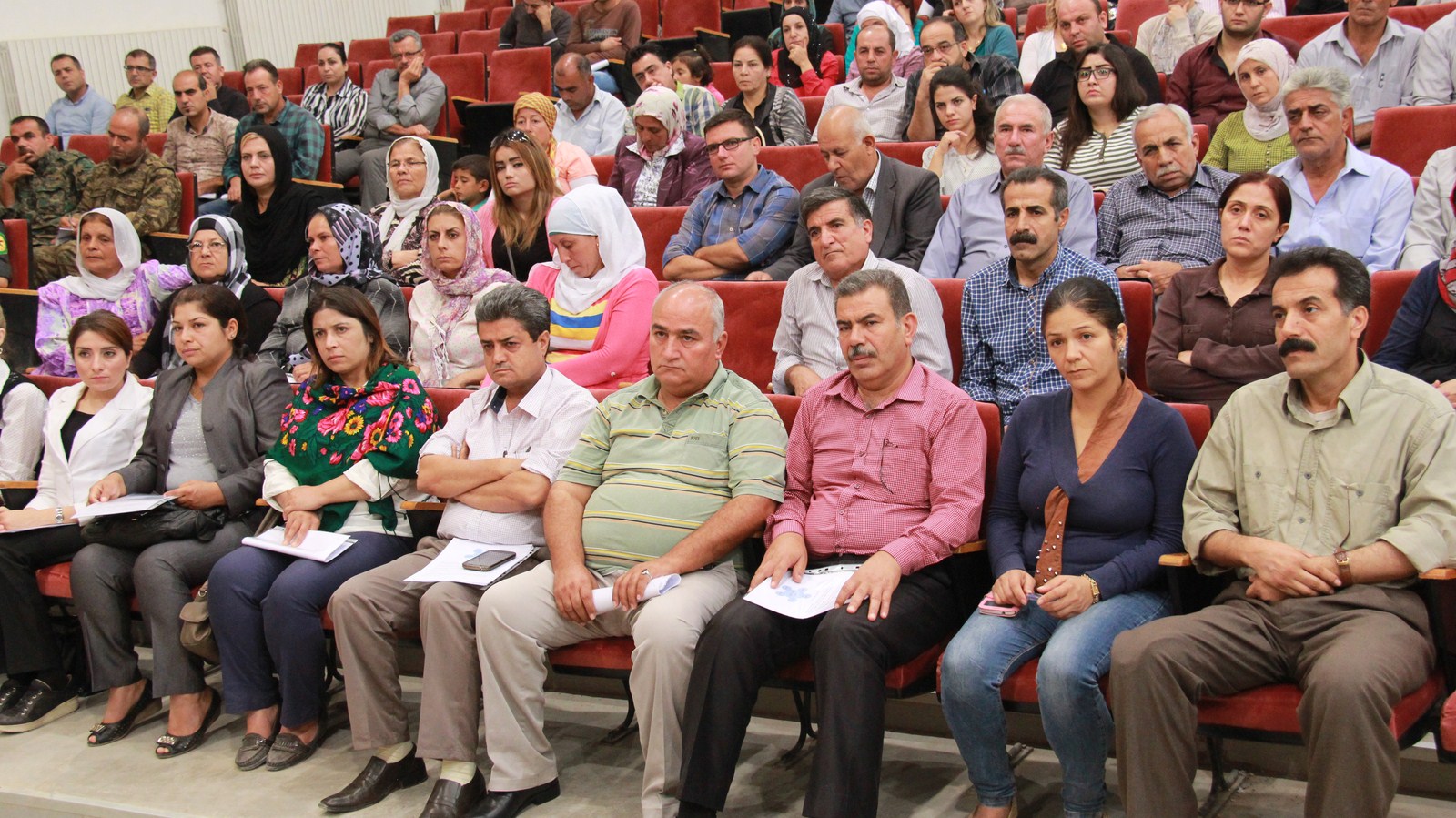 The first Democratic Economy Conference in Afrîn has finished with a number of decisions to develop the economy in Afrîn, make the region economically independent and to prepare a draft to submit at the Economic Conference for Rojava’s three cantons, which will be held on 18th October in Cizîrê.

The conference was the first of its kind in Rojava, and was held in Afrîn’s Centre for Culture and Arts. The attendants were representatives and deputies from the economic committees, the executive body in Afrîn, Customs Administration, Investment Advise Bureau, the People’s and Women’s Protection Units, industry and trade chambers, civil society institutions, organisation of human rights, Rojava Centre for Strategic Studies, the Democratic Union Party, the Yezdi association and the organisation of families of martyrs.

During the economic conference, which started on Thursday morning, many discussions were held and economic studies were submitted by specialists. The participants discussed mechanisms for developing the economy in Afrîn.

There were readings of the leader of the Kurdish people, Abdullah Ocalan’s ideas about economy and some of his suggestions to solve the problems of society that result from the economic practices of the nation-state and the capitalist system.

There were also some short lectures by specialists about the ways to deal with the economic problems, potential resources and how to invest them in a sustainable way.

The first lecture was delivered by Dr Ahmed Yousef, president of the Trade and Economy Council, about the developing approach in Rojava, which he called ‘ecological development’, which is based on economy, politics, environment, history and society.

Yousef said that ecological development equates the social profit with the economic profit and takes it as a basic standard, through activating the role of society in economy, building social and economic units, protecting natural resources and adopting environmentally-friendly technology.

There was another lecture by engineer Murad Rashid, member of the Committee of Urban Development, about the reality of housing, public services, and the ways to develop them in the region.

Rashid said that the whole region is suffering from high prices in real estate, as a result of the high cost of residential buildings, also because of the growing demand for residential apartments which is creating many problems with public services and infrastructure, which are under pressure due to the absence of any plan to develop real estate and improve the economy.

Nojiun Osman Yousef, an engineer specialised in telecommunications, talked about ways to develop information technology and communication, appreciating the role of telecommunication at the present time. He mentioned a list of procedures to be done, most importantly developing automation software, increasing electronic sevices for people, getting electronic equipment and making the necessary legislation for it, and launching an electronic education programme in Afrîn University.

The economic researcher and specialist Jalnak Omar gave a lecture about the role of the cooperative economy in developing agriculture and industry. He talked about adopting the philosophy of the cooperative economy that is based on the principles of unity, strength and work. Omar pointed out that the cooperative economy forms a special organisational tool that can contribute greatly in solving the problems of production, funding, marketing, distribution, and consumption, and it is effective and fair to all the sides of the economic process, and can be considered a democratic alternative for globalisation, capitalism and state socialism.

Economist Abdullah Yousef gave a lecture about the importance of tourism in developing the economy, referring to the most important tourist attractions and the cultural and healing significance of the region.

Also, Faisal Ali, economist and a commander of the People’s Protection Units, gave a lecture about the role of integrated economic policies in building the wartime economy in Rojava.

The lectures were concluded with a final lecture by Risan Qosho about natural resources in Rojava in terms of growth and sustainability, in which he referred to the economic policies that should be adopted in order to obtain the optimum investment of the economic resources.

There were many discussions among the attendants about the proposals in the conference, and their economic significance and influence on the region.

There were a number of recommendations for the democratic economy conference on the level of the three cantons in Rojava: Cizîrê, Kobanê and Afrîn, that will be held in Cizîrê on 18/10/2015, which were…