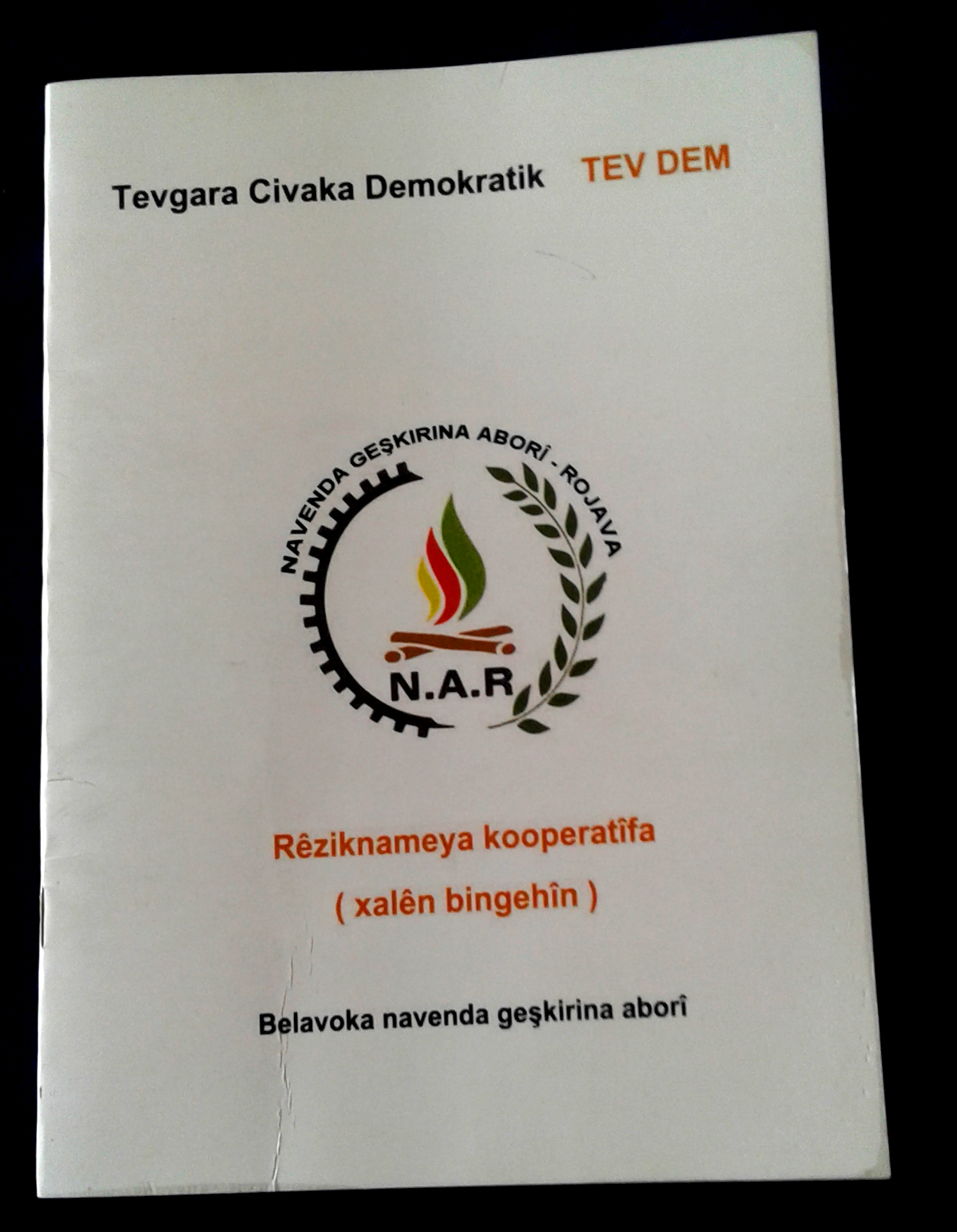 This is an official booklet produced by the Social Economy Development Centre, which is a part of the TEV DEM [Movement for a Democratic Society]. It lays out the basic principles under which co-operatives in Rojava run, based on decisions made after many meetings, which were attended by all of Rojava’s economic committees.

This translation of the book is taken from an Arabic version, while the pictured is the Kurdish language version. The translation has been verified by friends in Rojava, who confirm that this is the current and complete version at the time of publishing this article. The Kurdish name for the book is “Rêziknameya kooperatîfa, xalên bingehîn”, which roughly translates as “Co-operative guidelines (basic principles)”.

[Edit: very small amendments made to terminology 03/01/17 to more accurately reflect the translation]

All the co-operative’s members are members of the General Assembly.

The follow-up process is generally done by the co-operative commissions and meetings. If needed, a special follow-up commission is formed by the General Assembly consisting of at least three people. Members are not entitled to be members of other commissions such as the Financial or Administrative. It submits a report about its work to the General Assembly and to the Administrative Commission.

This coordination takes place with the participation of members from the Administrative, Financial and Follow-Up commissions and three other members from the co-operative. The mission of this coordination is to develop the co-operation between the commissions and the management. It holds a meeting once a month; evaluating the commissions’ reports during their meeting and taking the necessary decisions. After each meeting, a comprehensive report about their monthly business is prepared and submitted to the General Assembly Meeting which is held every three months.

(Foundations and standards of financial business)

All expenses must be recorded in systematic accounts. Two members of the Financial Commission and one member of the management should approve the accounts.

In addition, all the imports and sales must be recorded in receipts and bills. (These bills are not less important than the previous bills)

It is necessary that working hours are recorded, the start times for all workers and hourly workers need to record all hours worked in the book. The work carried by the worker should be documented so the worker knows what job they carried out and receives their payment at the end of the month for that work.

Which means the proportion for the co-operative must reach a level of 10% within five years, and in the year in which the capital increases the rate slightly, this number is added to the joint fund to boost the co-operative.

Evaluating mistakes and accounting errors in accordance with the terms and standards of the Democratic Society Movement and the Court of social justice.

(Errors and faults of second class):

Based on these criteria and self-democracy decisions exclusive financial power is prevented.