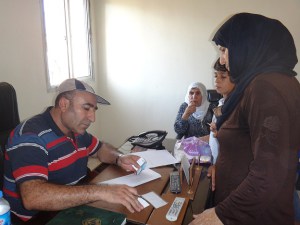 Management of the Hevgirtin cooperative began distributing dividends to its members today in Derik (Dêrik / Al-Malikiyah). The cost of one share stands at 6,500 Syrian pounds.

Hevgirtin, one of the most successful experiments in Jazeera canton (Kantona Cizîrê‎ / Cezîre / Jazira Canton), aims to develop the communal economy and involve regular people in it. It has been able to break the monopoly of traders and lower the prices of products.

Today, shareholders went to Hevgirtin to receive their share of the profits. Wasila Mohammad Husein, a shareholder, said, “I have 10 shares because I believe in communal work. Hevgirtin made a lot of sacrifices to break the monopoly of traders and managed to satisfy the needs of the people with very low prices in spite of the harsh conditions, and I hope that this organization expands and develop largely”.

It’s worth mentioning that the profits are being distributed in Derik, and it is possible to increase or withdraw the shares as desired.