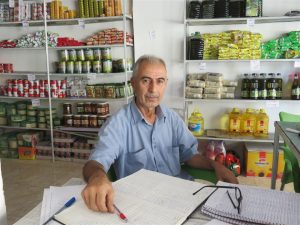 This article first appeared in Arabic on Kurdipost, 12th July, 2016

The Hevgirtin Consumer Cooperative Society branch in the Girkê Legê area began to distribute the six-monthly profits to shareholders.

According to administrators in the cooperative, profits for six months reached the sum of 8,738,100 SP. This was distributed equally among the 1,314 shareholders, at the rate of 6,650 SP per share.

The officials confirmed that the shareholders received the payments and were reminded that it was possible for them to buy new shares in the registration centre in the coop.

The Hevgirtin Cooperative Society was established in the Cizîrê‎ canton [Jazira Canton] at the end of 2015 and opened branches in every town of the canton. People participate with open shares, costing 15,000 SP each.

According to Ramadan Fatah Allah, a Hevgirtin official in Girkê Legê, many people are going to the centre of the cooperative to register and buy shares.