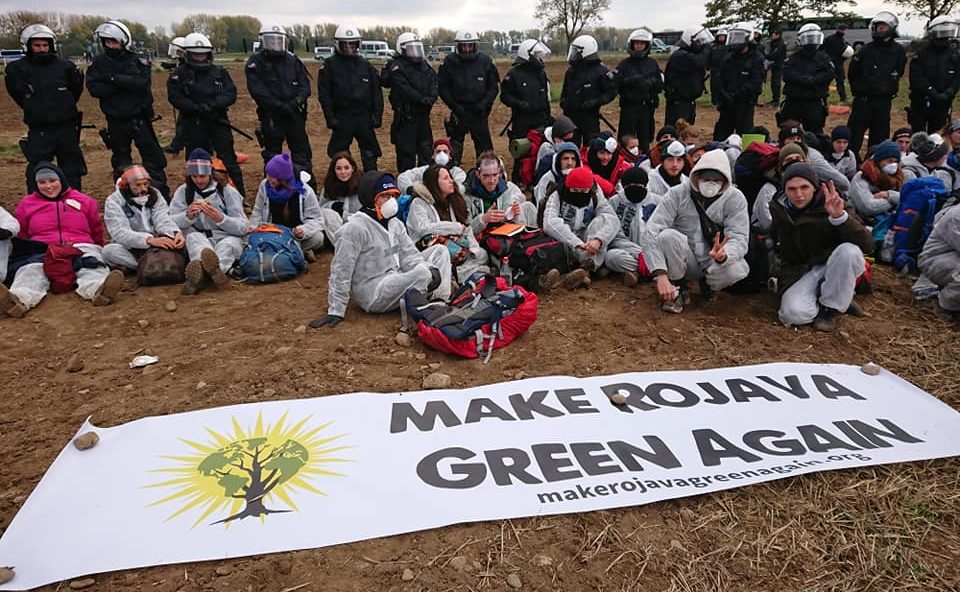 The Germany Minister of Interior Horst Seehofer declared on February 12 2019 a ban on the Kurdish publishing house Mezopotamya. The ban is directly affecting our ecological campaign “Make Rojava Green Again”. 200 copies of our newly released book have been confiscated.

The Mezopotamya publishing house is distributing not only our books, but a huge variety of books on the topic of Kurdistan in many different languages. The 200 copies of Make Rojava Green Again which were seized were due to be distributed through Mezopotamia. The books had arrived only some days before the declaration of the ban by the Ministry of Interior, and the place of the publishing house has been raided and closed. All of the books and brochures have been confiscated.

Within the last months the book has been released in English, Italian, Greek and German. French, Swedish, Turkish, Kurdish and Spanish editions are due to be released in the coming weeks. With the book we try to show perspectives for solving ecological problems within Northern Syria and worldwide. In this we refer to to the theories of Social Ecology of Murray Bookchin and the Democratic Confederalism of Abdullah Öcalan.

The ban of the publishing house and confiscation of materials directly affects our work. We condemn this decision and demand the return of the books as well as the lifting of the ban of the Mezopotamya publishing house. The closing of Mezopotamya is an attack on freedom of thought and speech. The ban is an attempt to suppress the discourse of the establishment of self-administration in Northern and Eastern Syria and perspectives on solving the crisis in the Middle East. The spreading of ideas of a gender liberated, ecological and democratic society will not be prevented by bans and censorship, because already today these ideas are source of inspiration and hope for millions of people worldwide. We will continue our work despite these actions and with an even higher motivation. Under these circumstances we especially call for everyone to read our newly released book, Make Rojava Green Again, and other writings affected by the ban, and to spread the writings. The critique of a system which is every day enslaving billions of people and pushing for the destruction of natural resources remains legitimate and today is even more necessary than ever.