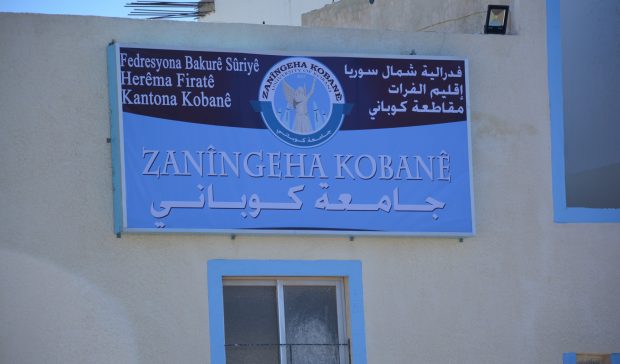 In the reconstruction process of Northern Syria, one of the first priorities by the Democratic Administration has been to develop institutions of Higher Education. On Friday, the Tabqa [Tebqa / Al-Thawrah] Legislative council attended the inauguration of the Democratic Society Academy which was set to begin classes on the following day.

Ferzende Munzir, an official from the Democratic Society Academies told ANF News that he hoped the construction of academies across Northern Syria could help construct and nurture a “democratic and moral society” based on peace and togetherness.

In Kobanî [Kobanê / Ayn al-Arab], the Democratic Autonomous Administration (DAA) also set up the first university in the Euphrates, a region that was formerly neglected by the Syrian Government. Prior to the Syrian civil war, Tabqa’s inhabitants moved to cities like Aleppo, Raqqa and Damascus to attend universities.

On the 10th of December, the Kobane University Administration announced that they had already successfully registered 45 students to attend Higher education in the war-torn region. The administration also provided further details about its day to day operations. According to a report published by ANHA Hawar News, the university will be divided into two sections, the first section will be dedicated to teaching Mathematics, Physics and Chemistry, while the second section focuses on Kurdish literature. The university will be multilingual, and courses will be offered in Kurdish, Arabic and English.