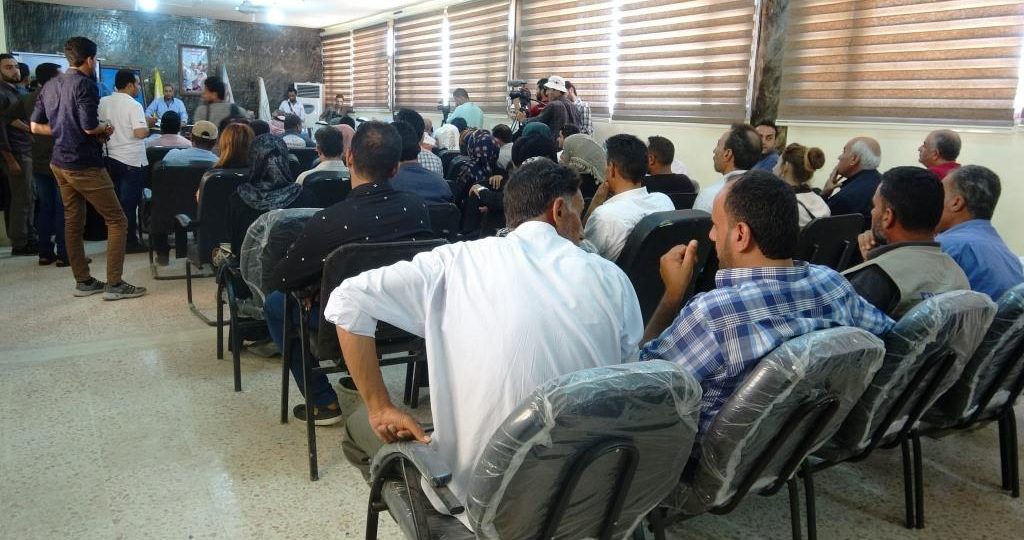 Under the auspices of al-Raqqa Civil Council, the Reconstruction Committee and the People’s Municipality Council, the first project of its kind was launched to develop the service level in al-Raqqa city.

After the great achievements made by al-Raqqa Civil Council and the People’s Municipality Council in al-Raqqa to improve the service level within al- Raqqa city which was heavily destroyed by IS mercenaries, and in order to raise the level of services and the speed of completion, al-Raqqa Civil Council held on Tuesday a meeting which is the first of its kind, and it included administrators in the service committees, intellectuals and workers in addition to the members of the local councils in al- Raqqa city.

During the meeting, the project was proposed to the attendees. After discussion, it was agreed to start two projects, the first of which is a comprehensive cleaning campaign of the city, and the other is the largest project in al-Raqqa which is the maintenance of sewage in al-Raqqa. The project is estimated to cost about $1,245,000 to rehabilitate the service sector in the city; the sanitation and the initial response team.

As Ahmad al-Khalil spoke on behalf of the Local and Municipality Department in al-Raqqa Civil Council, and said, “The city suffered from a large destruction made by IS mercenaries, and today, we are putting the cornerstone to advance the service and reconstruction level. As al-Raqqa Civil Council, we are still providing services of all kinds to improve the level of service in the city, and through the launch of these projects, we aim to accelerate the reconstruction and the return of life back to our city.”

At the end of the meeting, on behalf of the Central People’s Municipality in al-Raqqa city Ahmed Ibrahim said, “The first salute is to the Syrian Democratic Forces that liberated the city and its people from IS mercenaries, and today, we are working on congratulating the first project of its kind in al-Raqqa city.