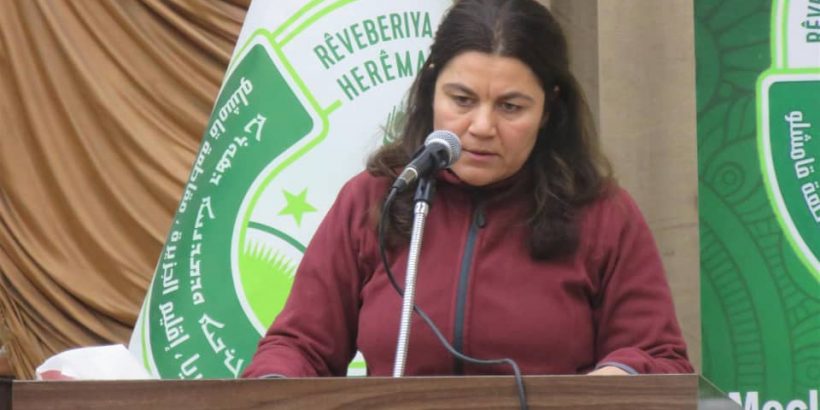 Fawza Youssef’s statements came during her participation in the annual meeting of Qamishlo Canton Council for 2019 held in Aram Tikran Hall for Culture and Art in Rumailan town.

In her speech, Fawza Youssef touched on the overall current situation in the region, focusing in particular on the economic conditions in light of the depreciation of the Syrian pound and the escalation of prices.

Fawza Youssef noted that the region in general is passing through an economic crisis that led in some countries to holding popular protests as in Iraq, Lebanon, Iran and other neighboring countries.

With the implementation of the “Caesar’s Law” sanctions, the situation will get worse and the Administration must find alternative plans

Fawza Youssef noted in her speech that the start of implementing the American sanctions known as the “Caesar’s Law” against Syria will greatly exacerbate the economic conditions.

She urged the Economic Body and other bodies of the Autonomous Administration to put forward a professional economic plan and discuss it in a way that contributes to finding development projects and dealing with the current situation.

Committees consisting of economic experts and engineers must be formed

Fawza Youssef stressed during her speech that the worsening economic conditions will negatively affect the political situation, especially as the Turkish occupation state continues its efforts to undermine the stability of the region, which increases the importance of working to deal with the economic conditions seriously.

Fawza Youssef suggested the formation of special economic committees which include engineers and economic experts to come up with ideas, directions, plans and alternative development projects at the level of al-Jazeera region and northern Syria.

Fawza Youssef stressed in the context of her speech that the regions of northern and eastern Syria have the capabilities and raw materials needed; fuel and reserves of grains and flour, so that they can achieve stability through finding serious development projects, and that the region’s administrations have experiences in facing blockades and support all bodies and committees to take responsibility for the status quo.