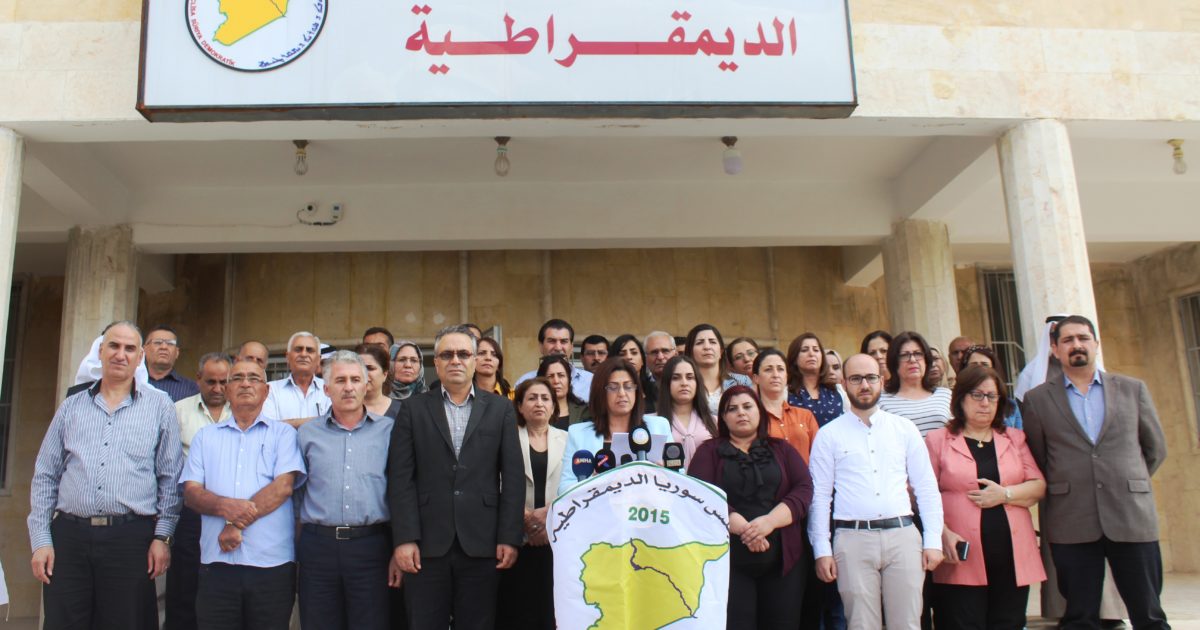 The Syrian Democratic Council (SDC) is a political assembly representing political parties and organizations in North and East Syria. The SDC creates a political framework for the governance of Syria along a decentralized, federal model. It is the political body to which the SDF reports. It is also the political counterpart to the Autonomous Administration, which takes on more administrative and executive functions. Negotiations with the Syrian government, as well as diplomatic relations with international powers, are generally conducted through the SDC.

Origins of the SDC

In its founding declaration, the Council set itself the task of “leading the Syrian revolutionary democratic movement along the right course, and ending the present fragmentation, bloodshed and darkness the country is being dragged through.”

The SDC, was created in 2015. 103 high-profile individual members and representatives of Syrian political parties and organizations were present at the congress which founded the SDC. In its founding declaration, the Council set itself the task of “leading the Syrian revolutionary democratic movement along the right course, and ending the present fragmentation, bloodshed and darkness the country is being dragged through.”

Participants in the founding congress of the SDC came from a range of political backgrounds and engaged in negotiations concerning key issues and principles behind the establishment of this new political body. One point of discussion which generated internal controversy was the continued use of the term “Syrian Arab Republic,” seen by many as part of the heritage of the oppressive Ba’ath regime. The congress eventually reached consensus on the term Democratic Syrian Republic, and agreed on a strategy of working towards a federal model for Syria rather than the top-down centralistic model of the Assad regime.

The SDC supported the development of the democratic administration of Manbij, Tabqa, Raqqa and Deir-ez-Zor after they were liberated from ISIS by the SDF. At a congress of the SDC in July 2018, the decision was taken to create the Autonomous Administration to carry out the work of establishing communes, councils and confederalism in each region. This enabled SDC to focus on its role as a political body, rather than an administrative one.

How the SDC is organized

The SDC contains three main bodies: the Executive Council, the Political Council and the General Conference. In many ways the Executive Council takes a leadership function because it is smallest and meets most often. For instance, Executive Council chair Ilham Ahmed led a delegation to the United States Congress to discuss the Turkish invasion in October 2019. However, both the Political Council and the General Conference are larger and more representative and so are considered to be higher bodies. The General Conference meets only once a year, acting as a more direct form of democratic input but without much executive power. The Political Council meets on a monthly basis. The SDC organizes its work through several offices: the Organizational Office, Women’s Office, Foreign Relations Office, Media Office, Youth Office, Finance Office and Archive Office.

The SDC contains a mix of political parties, civil society organizations and individuals. The membership of the SDC represents all the components of society in North and East Syria; Arabs, Kurds, Syriac-Assyrians, Armenians, Circassians, Chechen and Turkmen. People who want to join the SDC as individuals must make a written submission outlining their goal in joining the assembly, and the relevant group within the SDC conducts research on that person and whether they are suitable for membership. To be considered for membership, the individual needs to accept the principles of the SDC, such as the co-chair system, be making a genuine effort to resolve the Syrian crisis, and be of Syrian nationality. The person does not need to be resident in Syria, as they can join the meetings via a digital platform.

We will not accept a situation like before, that the Ba’ath party making laws, dividing and destroying. We want the constitution to be changed, we want formal acceptance of the Kurds and Syriacs and Assyrians…so we can take our place in a diverse nation. We don’t accept Syrian politics without a place for all the people of Syria.

Jihat Omar, co-chair of the External Relations Office of the Syrian Democratic Council

The purpose of the SDC is to work towards a democratic confederal Syria through conversations, consensus building and diplomacy. The SDC poses itself as an alternative to the Syrian National Council, which has been criticized for being under the influence of Islamists such as the Muslim Brotherhood, as well as of the government of Turkey, where it is based. Like the Syrian National Council, the SDC is in opposition to the Assad regime. The SDC states its aim as bringing together a coalition of democratic forces within Syria to build the movement towards a democratic political solution for the country. The Council has a stated focus on ‘Syrian – Syrian dialogue’ to envision a future for Syria, rejecting the dominant framework of international powers such as Russia, Turkey or the USA determining the fate of the region. Three conferences have already been held as part of this process.

This ‘Syrian – Syrian dialogue’ process also includes meetings with opposition parties and personalities who are not engaging in the SDC system, both within Syria and in the diaspora. Through these meetings, Council members say they aim to understand the criticisms and reservations of those who do not participate in the system, and to build understanding and unity. There have also been meetings organized within Syria with different sectors of society. For instance, a meeting was organized in Ayn Issa in May 2019 which brought together members of the SDC and 5,000 Arab tribe leaders. The Council is planning a mass conference, aiming to bring together 2,000 intellectuals to develop ideas and solutions for the challenges facing Syria. The SDC also aims to bring together organizations in a ‘National Conference of Syria’ to build a unified political vision for Syria, strengthen the movement for a democratic, federal Syria, and further the case for participation in the Geneva talks to write a new constitution for Syria. However, the official process for writing a new Syrian constitution has recently started with no representation from the confederal structures of North and East Syria and only nominal inclusion of Kurdish minorities through ENKS. There is also no inclusion of women’s organizations from North and East Syria.

The diplomatic role of the SDC

The Council plays a diplomatic role both within Syria and internationally. In October 2019, following the Turkish invasion, a delegation headed by Ilham Ahmed, chair of the Executive Council, traveled to the USA. The delegation met with members of the US Congress on the 22nd October to discuss the future of North and East Syria. Delegations of the SDC have also met with government representatives across Europe, and members of the Council have attended meetings in countries around the world, including Australia, Lebanon and Tunisia.

The SDC is the political entity engaged in negotiations with the Syrian regime about the future of North and East Syria’s relationship with the Syrian government. The stance of the Council up to now has been that they want to be integrated within the Syrian state, but in a federal system with a degree of autonomy, and with guarantees of respect for all the ethnic and religious groups living in Syria.

The incorporation of the SDF into the Syrian Army has been a contested issue between the SDC and the Syrian government in discussions about possible integration of the political systems. For a long time maintaining the SDF as a separate military force was presented as a non-negotiable by the SDC, because “without defense forces, how should we be able to protect our people and our political vision?” (Jihat Omar, co-chair of the Foreign Relations Office of the SDC). Although the SDC lost a significant amount of bargaining power due to the Turkish invasion, they continue to affirm that “the autonomy of the SDF in the region protected by it” (General Command of the SDF, 30 October 2019) must be maintained, although they may concede some degree of integration.

This article is an excerpt from the Rojava Information Center report “Beyond the Frontlines – The building of the democratic system of North and East Syria”.