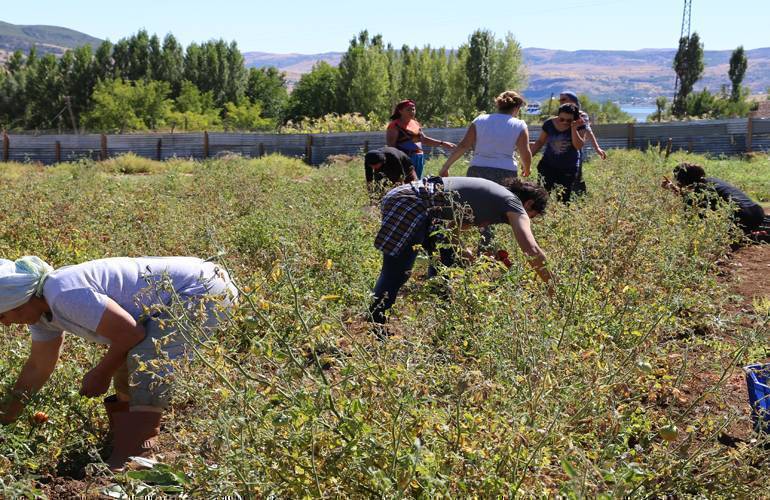 DERSİM – “Natural orchard” works have been carried out in order to become the natural farming and communal production widespread in Dersim. The works have been growing day by day with the participation of volunteers. Women have started a work to deliver the natural products to the people through cooperatives.

“Natural orchard” project put into effect by Women’s Assembly of the Dersim Municipality has continued with the participation of women. The project, whose aim is to become the natural farming and communal production widespread in Dersim, has have been growing day by day with the participation of volunteers. As collected vegetables have been given to those in need, the citizens have begun to establish a seed bank in the city.

The women are planning to form a cooperative in order to deliver the natural products, growing in the orchards, to the people in need. Dersim Municipality Women’s Policies Department Head Ayten Kordu said we had taken the ecological and social features into account while developing the project. Ayten stated that they would establish the seed bank with natural seeds and methods without using chemical fertilizers.

Ayten said, “We told our project to the women. We decided to carry out our project in order to give those in need free. Our aim is to form an area without money. There are also volunteers in this project. We began to work on April and we continue our works. We take the collected vegetables to old people, who cannot come here and those who cannot work and have financial difficulty. Our target is to form a cooperative now. We had difficulties with masculine mindset when we began this project. Men told us that women couldn’t do that. But women disappointed them. We managed to do that and we continue to manage.”

Şehriban Gürel is one of women who participated in the project. Şehriban said, “We joined to this project as volunteer. We come here to work at least twice in a week. I hope all women participate in this project.”