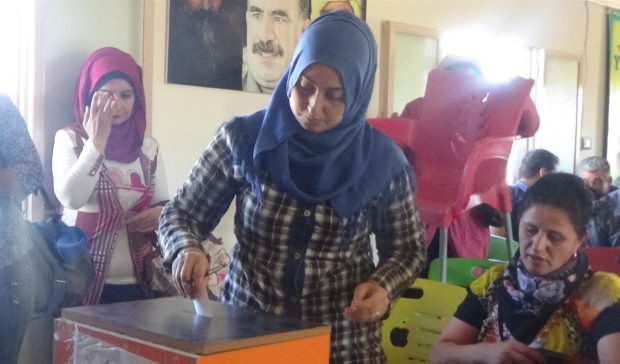 Qamişlo – Qamişlo City Council, in coordination with The Economic Development Centre in Rojava, held an expanisive meeting of representatives of cooperative societies to discuss the work of the cooperatives and to form an economic committee.

Qamişlo [Qamishli / Al-Qamishli] City Council, in coordination with The Economic Development Centre in Rojava, held an expanisive meeting in The People’s House in the Qenat Siwês neighborhood which was attended by representatives of agricultural, industrial and trade cooperative societies, the Union of Factories and co-presidents of committees in Qamişlo.

The meeting started after a moment of silence, then the Co-President of Qamişlo City Council, Ferushah Ramadan, spoke about the achievements of the cooperatives and the obstacles facing them, confirming that the coops have gained more experience and were able to cross many hurdles.

Ferushah pointed out that the main goal of forming cooperatives is to form a strong economy in the region, achieve self-sufficiency and break the siege imposed on Rojava.

There were discussions about the reality of the workings of the coops and the importance of combining efforts among them, and to continue working at the things that will make the experiment succeed and develop the economic reality.

During the meeting, they also decided to form two coops in Qamişlo: a livestock-breeding coop and an agricultural coop. The aim is to develop the economy and the livestock-breeding sector. Registration was open to participants at 70,000 Syrian Pounds per share.

At the end of the meeting, elections were held to form the new Economic Committee in Qamişlo. After the vote and counting, five people were elected, including the two co-presidents, Talal Abdul Qader Julie and Layla Ibrahim Yosef.