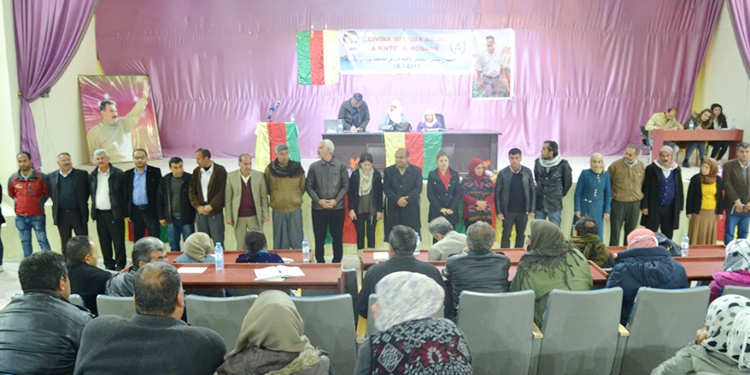 The Economic Committee of the canton Kobanî [Kobanê] had a meeting to decide on further steps to take. At the meeting, the committee’s new co-chairs were elected, and important decisions were taken─for example, about the creation of new cooperatives and a new union for the cooperatives.

After the military victory which captured the world’s attention, Kobanê has entered a quiet period of societal building. Serious work is going on in different areas, such as women’s liberation, ecology, safety and economic measures. The Economic Committee has led the creation of cooperatives. Its aim is to develop them and thereby strengthen the people’s economy. New projects were discussed at the conference that would be within the scope of the Economic Committee of Kobanê. For this, 103 delegates, who are members of the committee, met in the parliament building of Kobanê.

Delegates from Girê Spî [Tell Abyad], Sirîn and Manbij [Mabuk‎ / Minbic] were present, members and representatives of Kongreya Star, the Council of Martyrs’ Families and the Rojava Youth Union, as well as Enver Muslîm, one of the co-chairs of the Executive Council of Kobanê canton, and the co-chairs of the PYD Kobanê section, Ayşe Efendi and Ahmet Şêxo,

The economy will be key

Enver Muslîm, who opened the meeting, said that the economy had an impact on the whole of society and that this was why the economy was a topic high on the agenda. Subsequently, Muslîm expressed his belief that the projects underway in the economic sphere were going well. Afterwards, Dicle Mustafa from the TEV-DEM management foundation spoke, evaluating the developments in the political and military spheres. Dicle said that the answer to solving political and military problems was organising civil society in every form, first and foremost in the economic area.

Future projects and how to meet the needs of the agricultural economy were discussed. It was also decided that parliament members would receive academic education.

The main decisions taken by the meeting are these:

At the end of the meeting, the 27 members of the Economic Committee and two co-chairs were elected.