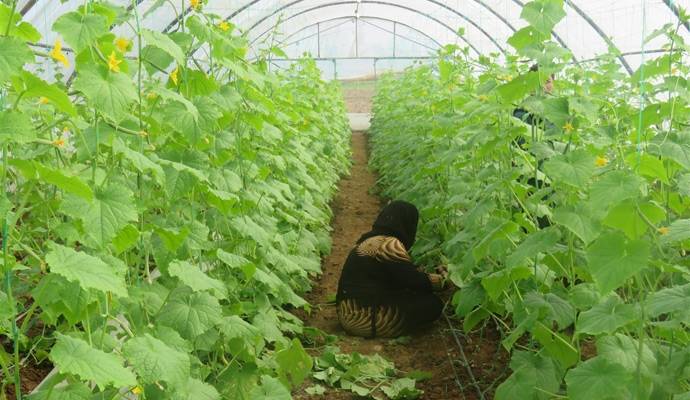 In Girkê Legê [Al-Muabbada], half a ton of vegetables are collected daily from the cooperatives. The vegetables reach the population with affordable prices through the community market.

GIRKÊ LEGÊ / ANHA – In the town of Rimêlan in Girkê Legê, the project set out by the Center for Economic Development two years ago has begun to yield results. The products collected within the cooperatives can be found in the communal market. Cucumbers, beans, lettuce, and parsley are among the vegetables obtained from greenhouses, which are then taken to the Girkê Legê market. This way, the local community puts its own means to use and partially breaks the embargo imposed by outside powers.

In the project, where half a ton is obtained daily, participants say that in the following days they will also have products such as tomatoes and aubergines, and increase the daily harvest up to a ton.

Egîd Mehmûd, an official involved in the project, says that they will be able to meet the regional need for vegetables and render the external chokehold powerless. Mehmûd also reported that the vegetables find their way to people’s homes with their affordable prices. The greenhouses in Rimêlan had been opened by the Rojava Center for Economic Development in January, 2014.