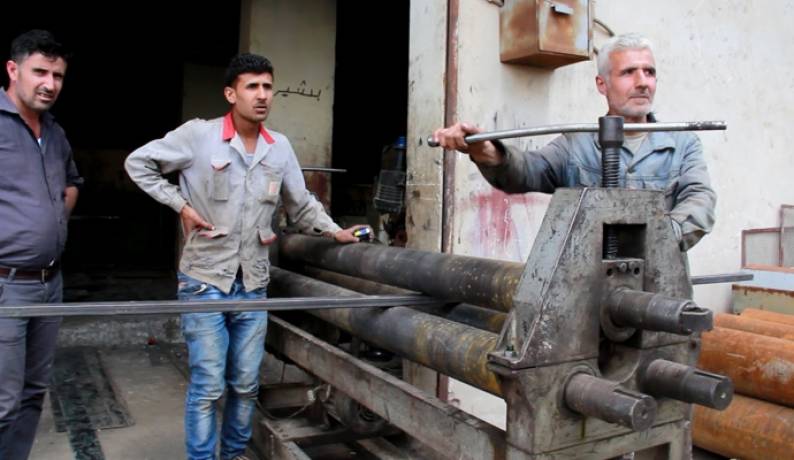 Rojava is quickly becoming a center of trade and production despite the shortages and sufferings caused by the ongoing war, according to an article from ANHA carried by Özgür Gündem.

Economic development is occurring along the lines set forth by the leadership of the Kurdish Freedom Movement, and current economic growth is being led by newly founded communes, committees, unions and civil organizing as part of the democratic economy model.

In the Efrîn canton alone, where hardly a workshop existed under the Baath regime, a new 84,000 square meter industrial park close to the Eşefiyê neighborhood is now home to at least 800 workplaces providing for the livelihood of 5,000 families.

This growth has been made possible in part due to the work of the YPG and YPJ forces in the canton which have kept Efrîn a place of peace and security despite the civil war engulfing the rest of the country. Despite having a pre-war population of only around 200,000 there are currently over 1 million residing in the canton. The new industrial park is helping to employ thousands of people.

All work in the industrial park is organized by committees, unions and civil society organizations attached to the communes.

Despite this success, many locals still complain about the expense of vehicle batteries, agricultural equipment and certain machine and plastic products. Supply shortages due to the war are largely to blame for the rising costs.

Selah Misto, one of the administrators of the industrial union, explained that procedures have been developed into order to ensure work proceeds in an orderly fashion and that all work was organized by committees attached to the production communes. He added that communes have already been formed to produce such goods as iron products, batteries, and automotive parts. Coordination between communes has helped to overcome problems with production and the newly founded committees work to provide expertise and oversight.

At the same time these communes have become a place for the organization of social life, Misto explained, describing how recently a football tournament had been organized among the workers.

He added that the economy was developing as part and parcel of the project of Democratic Autonomous Administration and that a another project was currently under to way to find a location for 150 new work-spaces.