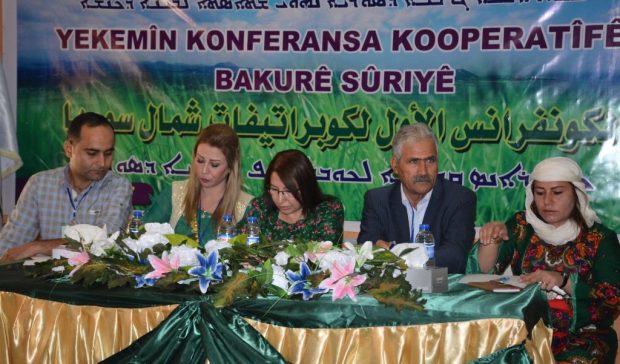 CO-OPERATIVES in Britain have sent solidarity to their counterparts in northern Syria to celebrate the region’s first ever co-operative conference.

A statement signed by 35 British co-operatives, including Co-operatives UK and bakers’ union BFAWU was sent to the new Unions of Co-operatives movement in the semi-autonomous region known by Kurds as Rojava.

The movement has recently been established in all three cantons of Rojava which gained de facto autonomy in 2012 during the ongoing Syrian civil war.

The letter highlighted the role played by the Rochdale Pioneers, a group of working-class people in the north of England who came together in 1884 to buy basic foods and open a small shop with collective ownership, selling necessities at affordable prices.

It said that those developing co-operatives in northern Syria were the “pioneers” of their own movement and hoped that a peaceful and democratic Syria would learn from them.

One of the region’s co-operatives is the Qamishlo women’s agricultural co-operative, which finished its harvest this month and will now share out the dividends equally between its 160 members.

British Co-operatives spokeswoman Jo Taylor said: “Support and encouragement for new co-operatives have played a vital role in the transition to a new democratic society in north Syria since the start of the Rojava revolution in 2012.

“The democratic, autonomous region has been undergoing a social, political and economic revolution despite, and in some ways because of, the horrific conflict taking place in the country.

“People are taking collective control of their lives and workplaces, and within this system co-operatives play an integral part in reshaping the economy.”