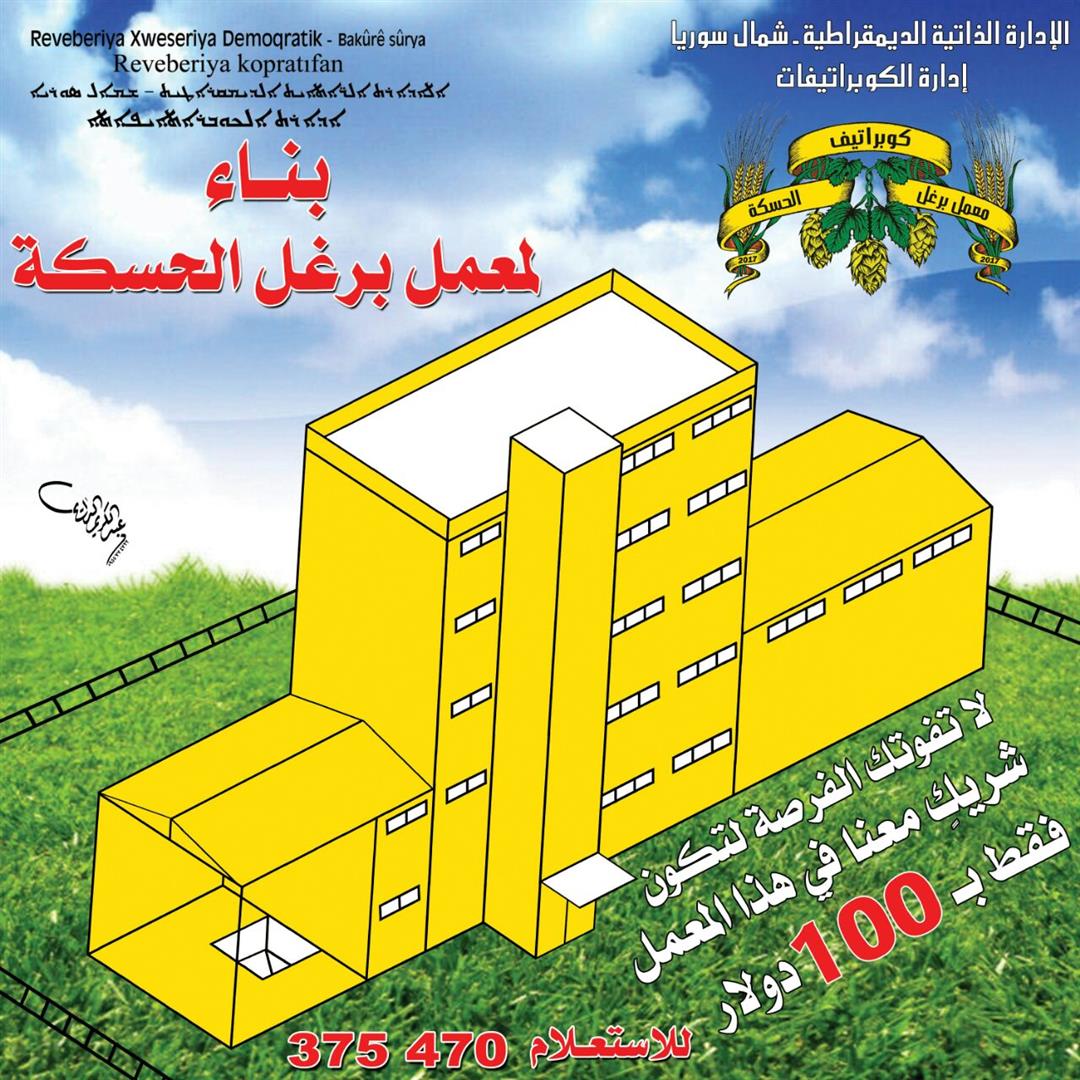 The Chamber of Commerce and Industry in Hasakah [Hesekê / Hesîçe / Al-Hasakah] has started building the Bulgur Factory Cooperative. The daily production capacity will be 20 tons. There are already 700 members, and the door is still open for people to participate in the project, which will start operating at the beginning of November.

Since the start of 2017, The Chamber of Commerce and Industry has been studying the bulgur factory project in Hasakah, applying the principles of the system of cooperative societies. The project has launched and the construction of the factory started on 26 March. Five members of The Chamber have been appointed to supervise the project until it is completed, to be given afterwards to the people participating in the project to manage it.

After conducting the economic feasibility study, it was proposed to set the price of a share at a $100. 2,500 shares have been allocated, and so far there are 700 participants. The door is still open for more to join.

A piece of land that lies between Hasakah city and the town of Safiyah has been granted to the project by The Chamber, and construction work has begun on the building, which will have four floors, and according to officials it will be finished on 1 November.

In an interview with Hawar News, Ahmed Kader, the co-president of the Chamber of Commerce and Industry in Hasakah, said, ”We want to develop the communal economy, prevent exploitation and monopoly and strengthen the ties between the people to benefit the common interest. Therefore we have been working to open these projects of cooperative societies. In this project we managed to get a lot of help from engineers in the Engineers Syndicate and other specialists. So far we have finished the first floor. The construction will be finished, machinery will be inside and the factory will start work on 1 November.”

Fadi J’djo, a member of the administration of the Chamber of Commerce and Industry, who is Syriac, said that this project will satisfy the region’s need for bulgur at affordable prices, and that it will also improve the communal economy.

J’djo said that they decided on a bulgur factory because the region is rich in wheat, which is the main ingredient of bulgur. He said, ”Wheat is one of the staple products of Jazira [Cizîrê] in general, and therefore we will not have to buy wheat from anywhere else. However, the price of bulgur is high in this region, and this project will impact the monopoly of wheat.”

Djdjo also reiterated that the door is still open for people to participate.