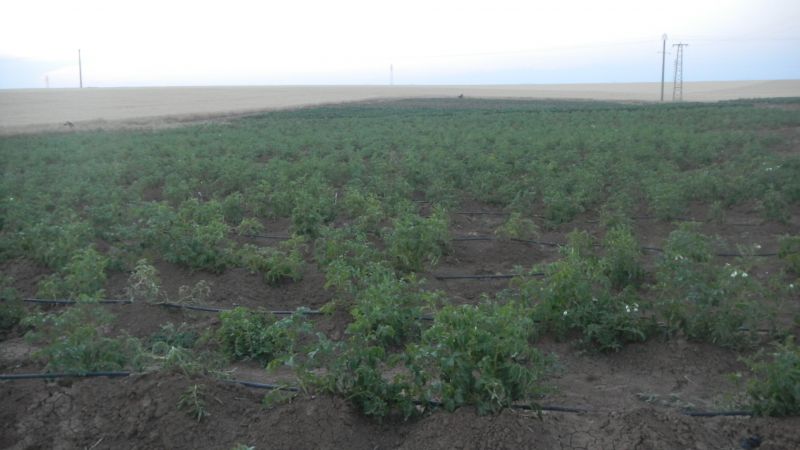 (ANF/NERGİS BOTAN/DERİK) With the Syrian economy collapsing because of war, the cost of living on the rise, and an embargo against Rojava, residents of West Kurdistan are building the future and affecting an economic revolution. The Agricultural Association in the Cizîre Canton, working as part of the Economic Development Association, has brought in the spring harvest and put it on the market at very low prices.

Newzat Silêman, one of the managers of the Agricultural Association, explained that around a month they began to offer up produce such as tomatoes, cucumbers, and peppers at very affordable rates. Silêman explained, “for example a kilo of cucumbers which was being sold for between 115-120 kuruş [cents] is now sold for 90. That is to say as a principal we make our products available at around 15-20 kuruş cheaper than the market rate.”

Silêman reported that in the Cizîre Canton 1200 decares are being used for vegetable production alone, and that this produce has been introduced in the markets around Girkê Legê and will continued to be put on more markets in the surrounding area.

“In Girkê Legê vegetable production has begun both in greenhouses and in fields” said Silêman, “Produce from the greenhouses first went on the market around a month and a half ago. Right now the first harvest of vegetables from around 60 decares of open fields is also bearing fruit.”

Silêman also explained that engineers were involved in the project and overseeing the use of fertilizer as well as all precautions against pests. He emphasized that all produce grown in the greenhouses were entirely natural and added that such facilities were providing around 400 kg of vegetables daily to markets around Girkê Legê.

Produce To Be Sold Around The Entire Canton In 15 Days

Silêman went on to explain that in around 10-15 days time the harvest from the entire 1200 decares would be made available throughout the whole of the Cizîre Canton, and that these would also be sold at least 20 kuruş below the market rate.

Finally Silêman emphasized that this development was strengthening the hope that the people would be able to govern themselves, and that even if only a little less these lower prices were increasing confidence, saying “we are trying to send the message that we can govern ourselves and that we have no need of outside help. In this way we are producing our own vegetables. The regime consciously forbid us from planting anything other than lentils, chickpeas and wheat. The goal of this was to bring to the people to a status of permanent dependence on the outside. Whereas the lands of Cizîre are very fertile. Many different fruits and vegetables can be grown. We are trying to show this. And on this subject there is a great sensibility among the people.”