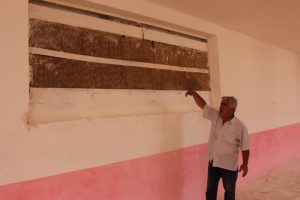 The Poultry Project in Hasakah [Hesekê / Hesîçe / Al-Hasakah] is aiming to raise about 18,000 chickens every three months, which will produce about 72 tons of chicken meat per year. This will meet the needs of Jazira Canton [Kantona Cizîrê‎ / Cezîre] for meat.

This level of meat production used to be met by the local poultry farms that were spread around the canton, and which also exported to many other parts of the region. But the new circumstances of war, and the mercenaries’ control of the routes between Bashur [South Kurdistan / North Iraq], and Turkey, led to a drawback in the production of chicken meat due to lack of poultry feed and medicines, causing inflation in the local markets.

The economic committees in the region have been trying in recent years to find alternatives by supporting local production, which would foster self-reliance and improve the local economy.

One of the pioneering future projects is the Poultry Project in Hasakah. The project is a co-operative society that already includes 516 participants. The poultry farm will be built on an area of 10,000 square meters in the village of Tweina, west of Hasakah, and it will consist of five units that will be used for raising chicken.

The preparation for the project has almost finished, according to administrators. The units have been built, and now they are working on getting heaters, air conditioners and other necessary items for the project.

Ahmed Ali, an administrator in the co-operative, estimates that they will produce about 18,000 chickens every three months, which means that the project will produce 72,000 chickens per year, satisfying the Jazira region’s very important need for chicken meat, estimated at about 20,000 tons of meat. The high production rate will lower the prices of chicken meat, which should reduce the damaging effects of the blockade imposed on the whole region.

According to specialists, the first step of the project will be importing chicks, until all the eggs have hatched. Ahmed said that this co-operative society will raise the production rate of the region, reinforcing the communal economy and the notion of self-reliance.