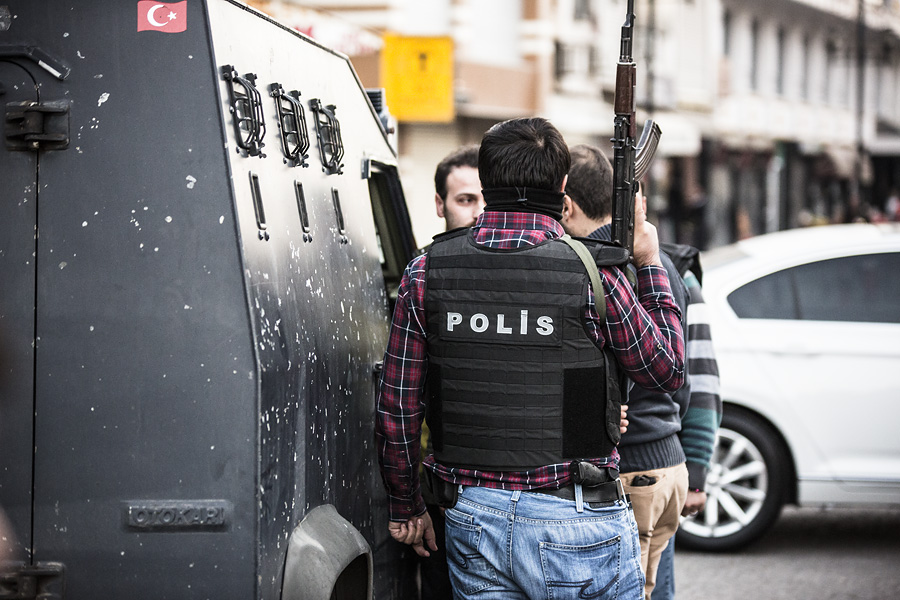 As part of the indiscriminate military conduct of the state, electricity had been cut off in the area of Sur under curfew, most of the shops and bakeries were closed and water and food supplies were running out. Similar things, even graver, were reported from all other cities where curfews were declared. Quite obviously, the goal of the state was a depopulation of those quarters. While some highlight the fact that this is due to gentrification and reconstruction plans of the Turkish state and capitalist groups close to the government, the real reason is a political one: the state wants to sever the ties between the militants and the people in a physical as much as in a political and ideological way. And indeed, many people had left the embattled quarters because their houses were shelled and essentially made uninhabitable or, more directly, been turned into bases for state forces, or not least because they were running out of food and water.

This is part of the general approach healthcare workers describe as a denial of the right to life and health. In front of the Diyarbakır [Amed] municipality, healthcare workers from different sectors came together and staged a permanent picket since December because of the deteriorating health and living conditions throughout Kurdistan as a result of the current war. Barış, who was responsible for organizing the picket when I visited the healthcare workers, told me that by now healthcare workers no longer dare to work even in the non-curfew areas of Sur for security reasons, which in turn lead to constantly deteriorating health conditions in Sur. They were blocked from transporting the wounded or dead so regularly, he told me, that they could no longer practice their duties. In cities other than Diyarbakır the situation was even worse. In Cizre, the two only open pharmacies had been forced to close down because they were shelled. Aziz Vural, a healthcare worker in the emergency aid sector of the hospital in Cizre, was killed by a sniper with a shot to his head as he was trying to help an elderly woman who was wounded by gunfire. In Cizre, Silopi and Nusaybin hospital courts had been transformed into emplacements for artillery and tanks.

It is mostly civil society organizations that provided for the most basic needs of the population that was forced to migrate from Sur. A friend of us from a civil society organization named Umut Işığı Kadın Kooperatifi [Light of Hope Women’s Cooperative] told us that according to the numbers provided by the municipality, over 25.000 of the 50.000 inhabitants of Sur had been forced to flee and understandably the quarters with the most intense fighting were also the ones with the highest number of forced migration. Back then, the municipality claimed that they and other civil organizations could only reach out to 10.000 of those who had fled. From Ramazan Karabal of the Rojava Association – an organization that coordinates humanitarian aid – we learned that the state not only did next to nothing for the victims of the war, but also actively blocked aid from civil society organizations. No aid packages could be delivered to Sur or Cizre. As some families from Sur later on told us, the reason for this is the claim of security forces that food and other aid packages would immediately go to the “terrorists”.

The civil society organization Umut Işığı Kadın Kooperatifi could not use its branch in Sur any longer since it was located directly in the area under curfew and was hit by gunfire. Instead, they organized activities for families from Sur outside of Sur, especially for the children, to give them a chance to live a life without war, at least for a couple of hours. Activists of the cooperative also hosted children and families from Sur that had to leave the neighborhood. However, while the children obviously enjoyed the little festivity that the activists from the cooperative organized on one of the weekends I was there as well, things looked more grim as soon as one digged deeper. As activists told me, children were ailing from stomach pains and headaches all the time and the exposure to war sounds lead to them hearing gunfire and hiding all the time even if there was none. At night they often cried. One child jumped off the bus that was bringing the children back to Sur after the organized activity crying and shouting that he doesn’t want to go back to Sur anymore. In Sur, the bus was stopped for hours before the children and their families were let into their residential areas – stripped of most of the aid packages they had received.

At that same small festivity I also had the chance to talk with families from Sur. They all made similar experiences: one woman was forced out of her home since it was turned into a special forces headquarters, while her father’s house was bombed to the ground forcing both to leave Sur. Another woman that lived in Sur reported on how she was taken in custody as she was entering her quarter by the same policeman who was controlling her entrance every single day and knew her well. “Just because I want to” is what he answered when she asked him for the reasons. “Being taken in custody” for her meant being brought into a gym crowded with other people experiencing the same fate and being unclothed. On top of it she was fined for 208 TL (around 70$) for entering a curfew zone – actually the zone where she was living. Arbitrary denials of entrance to residents were widely reported mostly being accompanied by blaming the residents for the war. “You shouldn’t have voted for the HDP, that’s why there is war now” or similar things were widely reported to be said to residents and civilians by security forces. And that’s the polite version compared to what security forces did in Silopi for example. I’ll come back to that later on.

The Turkish state claims that it offered help for those who were forced to flee from the war-torn areas. However, the only thing in that regard I heard of from former residents of Sur was that they were paid around 400TL (around 130-140$) by the state once or twice, which isn’t even enough for paying rent and compensating the loss of economic activity due to forced migration. Residents also reported that help is only given if one declares that one is a victim of “terrorism” – by which is meant the PKK of course. And most of the people told me that they got nothing at all. What is particularly perfidious was the following: some families had to leave the quarters with intense conflict and then lived in so-called “disaster houses” in other quarters of Sur, i.e. public residential spaces designed to house people if natural catastrophes or the like have made people’s original residential spaces uninhabitable. But since the state declared that there were close to no civilian casualties and infrastructural damage (other than that done by the PKK of course) because the war proceeded in the most prudent and cautious way possible, it stated that there was no situation of catastrophe. And because of this, people then staying in those disaster houses because their houses were bombed to the ground even had to pay rent.

The situation of the education of the children affected by the curfews was similarly dire. At the end of January, workers from the education sector and their union, Eğitim-Sen, also started a picket against the deteriorating educational and living conditions of the children. Schools were temporarily closed and teachers called back from cities where curfews were declared while school buildings also were transformed into special forces headquarters and artillery emplacements. According to the numbers of the workers of the education sector, at least 90.000 pupils could not attend school anymore and replacement crash courses were by far not enough. However, they also saw the main problem in the war and the psychological damage it caused with the children and they consequently demanded an end to the war as the main stepping stone towards a restoration of the normal educational processes.