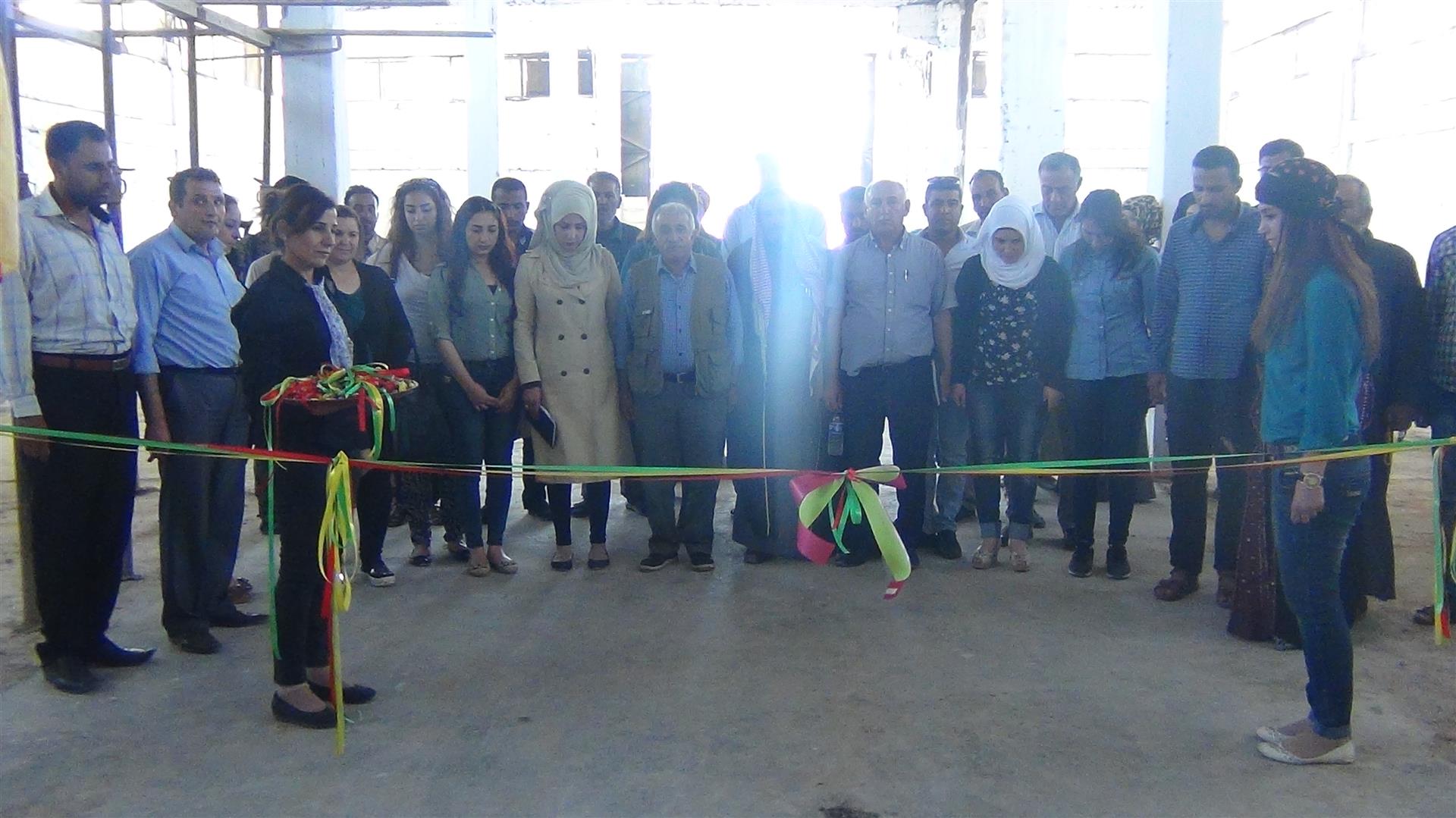 The Chamber of Commerce and Industry in Sheddadi [Şeddadê / Al-Shaddadah] opened a bakery and formed a cooperative society to run it in an effort to solve the crisis of bread shortage in the region. The production rate of the bakery is 3,000 bags of bread per day. There are 48 members participating in the project so far.

Lack of bread in the region of Sheddadi is one of worst problems that the people have been suffering from. This is partly because the central bakery in the region was bombed by the mercenaries [ISIS] when they occupied it, and also because the bakery that was opened with the coordination of The Democratic Self Administration in the Jazira Canton [Kantona Cizîrê‎ / Cezîre] and The Syrian Democratic Forces, wasn’t able to fulfil the needs of the local population, especially after they had returned home after the Şeddadê liberation campaign─known as ”The Wrath of Khabur”─to liberate the southern countryside of Hasakah [Hesekê / Hesîçe / Al-Hasakah]. The Chamber of Commerce and Industry in Sheddadi has been studying the plan to open a bakery and let a cooperative society run it.

In order to speed up the project, the Chamber of Commerce and Industry took it upon itself to construct the bakery and secure the machinery and equipment. The prices of shares are going to be presented to the people when the bakery is ready.

The bakery’s daily production capacity will be around 3,000 bags of bread, and that will have a big impact on the bread crisis in the region, making it easier for people who had to queue for many hours for bread.

While the project was being launched, people started enquiring at the Chamber of Commerce and Industry to participate in the project. The number of shareholders reached 48, and the price for a share is 25,000 SYP [Syrian Pounds].

A celebration was held at the inauguration of the bakery, which was attended by many people of the Sheddadi area.

The inauguration ceremony started with a minute of silence, then the joint president of the Chamber of Commerce and Industry, Evlin Ahmed, gave a speech in which she thanked the people of the area for attending the ceremony, and said, ”Taking into consideration the suffering that people are going through for bread, we have decided to open a bakery in the Sheddadi area in the form of a cooperative society.”

Evlin Ahmed said, “This project is the first cooperative society in the area, and it will play a big role in improving the communal economy and creating jobs, in addition to making bread available for the people in the area without difficulty or trouble.”

Evlin also said that they started telling people about the shares. “To speed up the project, we paid for everything, and today the bakery will start officially, and the door is open for people to participate.”

In her speech she also noted that the dividends will be distributed at the end of every month. She said, ”Developing the communal economy is our goal, therefore we rely on cooperative societies in our projects, so that these projects can be owned and benefited from by the people.”

At the end of her speech, she said that they will work on forming new cooperative societies in the region, to help it prosper.

Then the mother of the martyr Ciwan Şeddadê, who lost his life in the Wrath of Khabur Campaign, cut the red ribbon to the applause of the surrounding people.

In an interview, Fadel Ahmed, a citizen who lives there, said that securing bread has been one of the most important and biggest problems that the people in the region have been facing. He said, ”Hearing that a bakery is under construction created a state of relief among the people, because it saved us a lot of worries trying to think where to get bread from.”

Fadel thanked all the people who contributed to this project and said, ”These kind of projects will contribute to the prosperity of the area, and we hope that there will be more projects to serve the people.”